Gwen Stallkamp of Albert Lea was inducted into the Minnesota State Fraternal Order of Eagles Hall of Fame during the State Convention in Rochester. Stallkamp has been a member of the Eagles since 1978. During that time she has been an officer locally, going through all of the chairs, including president. Stallkamp has also been an officer on the District, State, Regional and National Grand Aeries. She has gone through the chairs and has also served as President of the State of Minnesota, North Central Regional President and Grand Madam President and is now Past Grand Madam President. 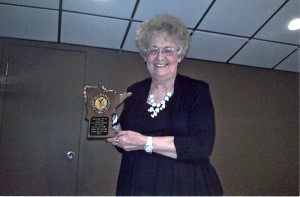 Gwen Stallkamp was inducted into the Minnesota State Fraternal Order of Eagles Hall of Fame. – Provided

Stallkamp is also on the Albert Lea ritual team which competes at the district, state and grand levels. The team has performed well and won numerous times in competition. She was also on the memorial team and has served as one of the installing officers for newly elected officers at local, district and state.

Stallkamp has helped with all events at the local club, including working in the kitchen, helping and chairing Friday and Saturday night suppers, helping with Sunday breakfasts, working Thursday night hamburgers and helping with the salad luncheons and the soup and pie suppers. She has also helped to generate funds for many charities such as Heart Fund, cancer, Jacob Wetterling Foundation and Home on the Range. She received a grant to be used for defibulators for the local law enforcement. She enjoys modeling for the mother/daughter banquet and has been Mother of the Year. She has committed numerous hours to the Eagles by attending local, district, state and grand conventions. She works with the Past Presidents Club and on the presidential scholarship committee. Stallkamp serves on the board for Home on the Range as well and is on the board for Eagle Village.

Stallkamp worked for the Department of Human Services for 35 years and, after retiring, continues to transport and help youth to get to appointments and receive help for the less fortunate.

Albert Lea Fraternal Eagles No. 2258 Auxiliary is very proud to call Stallkamp a sister and feels she is a true symbol of their motto, “People helping people.”