Local family gets tickets to All-Star Game from relative 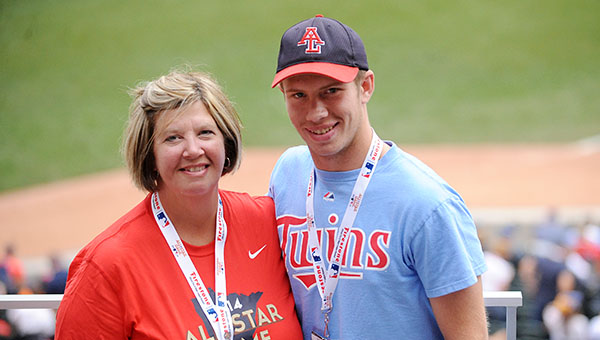 Learning from the best in baseball

He went from playing baseball for Albert Lea’s high school team this spring along with the VFW and Legion squads this summer to watching the best players the sport has to offer. 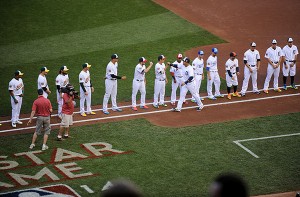 Moyer had the opportunity to take in many activities during All-Star week, a celebration that started with FanFest last Wednesday and culminated Tuesday night with the battle between the American and National Leagues for home field advantage in the World Series.

In addition to the game, Moyer said he attended FanFest and the home run derby.

“The whole thing has been unbelievable,” he said.

Moyer received passes through his cousin’s husband, John Bullock, who is a Twins season-ticket holder and won the passes in a raffle. He was able to attend with his mother, Rita, and his father, Jeff.

Yoenis Cespedes of the Oakland A’s won the home run derby for the second consecutive year on Monday, but that wasn’t what caught Moyer’s eye — or the attention of the rest of the fans at Target Field. It was a 510-foot blast by Giancarlo Stanton.

“There was no noise in the ballpark as soon as he hit that,” Moyer said. “Everyone’s breath was gone. It just kept going up and over the fence.” 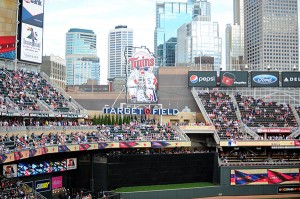 The Minnesota Twins hosted the MLB All-Star Game Tuesday at Target Field in Minneapolis. Minnesota’s Glen Perkins came away with a save that preserved an American League victory. – Micah Bader/Albert Lea Tribune

The AL team took a three-run lead in the first inning. It started with a double by the Cardinals’ Mike Trout and featured a 372-foot home run to left field by Detroit’s Miguel Cabrera.

However, the NL added two runs in the second and tied the game in the top of the fourth with a double to deep right field by the Brewers’ Johnathan Lucroy.

The AL answered in the bottom of the fifth with an RBI double by Trout and an RBI sacrifice fly to left by Houston’s Jose Altuve.

Headed into the ninth inning, Minnesota closer Glen Perkins — a homegrown Twin who attended Stillwater High School and the University of Minnesota — took the field along with Twins teammate Kurt Suzuki at catcher.

“I think I pitch a little differently than a lot of guys, and that was very comforting to me (to pitch to Suzuki),” Perkins said. “That was the first inning when I got out there, and I was able to relax because I saw it was him. He’s been awesome all year for everybody — for me especially — and he was great again tonight.”

When asked what he’ll remember about the game 20 years from now, Perkins said it was the jog to the mound.

“I wasn’t fighting back tears, but it was an overwhelming moment to hear the buildup as I walked out of the pen, and then it got louder and louder,” he said.

With one out left in the game, the crowd became even more involved.

“After I got the first and second out, they were chanting,” Perkins said. “That doesn’t happen during the regular season. It was a moment like that when you realize why you play the game and what makes the game so fun — it’s the fans in the stands.”

The Twins pick up the regular season in the basement of the AL Central with a 44-50 record. However, Minnesota has the best record of any team at the bottom of its division.

The Albert Lea Legion and VFW teams continue their seasons with the District 1 tournament. Bracket information will be published when it is announced.