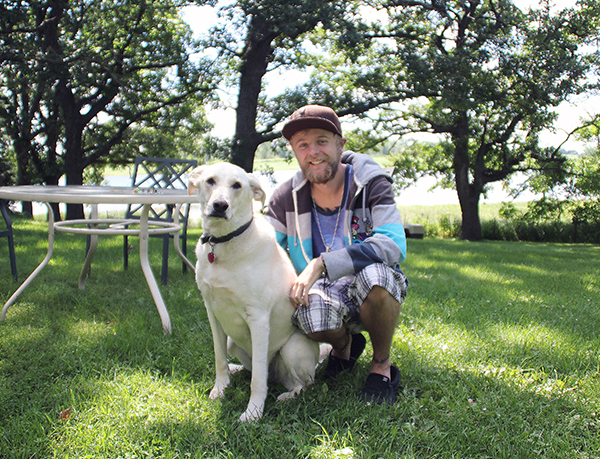 Nineteen-year-old Bob Culbertson grew up watching his mom make jewelry. It wasn’t the style of jewelry that caught his eye, but instead the stones she used in her work. Once in a while, he found himself taking some of them.

At the age of 15, Culbertson, of Albert Lea, attended his first festival at Harmony Park. He saw people selling their crafts there, some of which included jewelry using wire wrapping and stones much like the ones his mother had.

“I thought to myself, ‘I wonder if I could do that,’” Culbertson said. 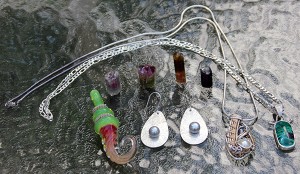 Tourmaline stones, along with jewelery made by Bob Culbertson, are displayed at his home earlier this week. – Erin Murtaugh/Albert Lea Tribune

After that, he went to Walmart to buy some wire for himself and started testing the waters of jewelry making.

After graduating high school, Culbertson was left with many options of what to do with his life. At first, he planned on going to college for business. His mom, Lori Barkema, was his inspiration down this unconventional path.

Culbertson recently got back from a five-day intensive class at the Denver School of Metal Arts, where he learned new techniques for metal working and setting stones. He plans to attend more classes like this. Culbertson is thankful he won’t have student debt, but wishes he could have put his scholarship money toward supplies and tools for his craft. To pay for supplies, he works only when he needs to, mostly consisting of odd jobs.

His mom sparked his passion for jewelry making, but Culbertson credits a lot of his motivation to his dad, Tribune account executive Clay Culbertson

“My dad sells advertisements,” Bob Culbertson said. “Watching him do that taught me how to talk to people. I sell to good-hearted people.”

Culbertson supports fellow area artists by buying and promoting their work, such as Chastin Allen and Josh Schwarz, who make paintings using a spray-paint method, and Lewis Kelly, who does wire work similar to his own. Right now, Culbertson does most of his jewelry sales at music festivals because the market isn’t big for it in town. Culbertson would like to see an art scene develop in town where younger artists are encouraged to work and display their craft.