The Minnesota Spay Neuter Assistance Program will be coming to Albert Lea once again to help sterilize pets in the area.

MNSNAP will be offering low-cost spaying and neutering of cats, dogs and rabbits as well as some other procedures to qualifying people at 9 a.m. Monday at New Life Christian Church, 1705 S.E. Marshall St.

MNSNAP performed its first surgery in April of 2010. Since then, it has completed over 48,000 spay and neuter surgeries in the state. 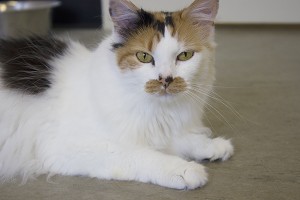 All animals, like Poppy the cat, that are adopted from the Freeborn County Humane Society are sterilized, either by a veterinarian or MNSNAP. — Hannah Dillon/Albert Lea Tribune

Dana Andreson, executive director of MNSNAP, said that the program’s founder, Kim Culbertson, wanted to help reduce the number of shelter animals that are euthanized each year.

Culbertson helped start MNSNAP to do just that. By offering lower-cost sterilization surgeries more animals can get sterilized, thus lowering the potential amount of animals that could end up in shelters, Andreson said.

“You have a current population of animals in the shelter system,” Andreson said. “What we do prevents additional births. A significant number of animals can be produced from two animals.”

According to the ASPCA website, about 7.6 million animals are brought in to shelters each year. Nearly 3 million of those animals are euthanized because they are not adopted.

The ASPCA’s website says that it’s impossible to determine how many stray dogs and cats live in the U.S., but estimates for cats alone are up to 70 million.

Andreson said that one of the biggest pieces to MNSNAP’s mission is keeping animals off the street and out of the shelter, and helping reduce pet overpopulation by spaying and neutering can help a lot, she said.

Besides preventing reproduction and pet overpopulation, Andreson said that spaying and neutering can have some health and behavior benefits.

Neutering male animals can help cut down on aggressive behavior, and Andreson said that spaying a rabbit completely removes the risk of uterine cancer.

Christa DeBoer, shelter manager at the Freeborn County Humane Society, said that the shelter has been bringing animals to MNSNAP clinics for about three years.

The number of animals varies each time due to scheduling and need. DeBoer said just one animal was being sterilized on Monday’s clinic.

Every animal that leaves the shelter is sterilized, either by MNSNAP or a regular veterinarian, but DeBoer said that MNSNAP helps the shelter out a lot economically because sterilizing animals there is much more cost effective.

MSNAP has been to Albert Lea 12 times, and has two more clinics planned this year: one on Sept. 23 and another on Nov. 17.

To keep costs low, Andreson said that MNSNAP fundraises, which is something most vet clinics cannot do according to MNSNAP’s website.

DeBoer stressed that the shelter is very appreciative of what MNSNAP does for both the shelter and the community, and that spaying and neutering pets is important not only for reducing reproduction but for health and behavior issues, as Andreson said.

In order to qualify for one of MNSNAP’s low-cost sterilizations, proof of participation in a needs-based public assistance program — such as SNAP benefits, Medicaid, Social Security Disability, HUD Section 8 Housing, WIC or unemployment, among others — is required.

Clients can also qualify if their household earns less than $40,000 per year, as long as they bring the most recent income tax return that reflects this.

Caretakers of feral or barn cats can bring in cats for sterilization.

Qualified clients must also have a valid Minnesota-issued I.D.

Other services are available by request, such as rabies shots and microchipping.

To learn more about MNSNAP or to contact their office with questions, go to http://www.mnsnap.org.