Man injured when pickup rolls on I-35 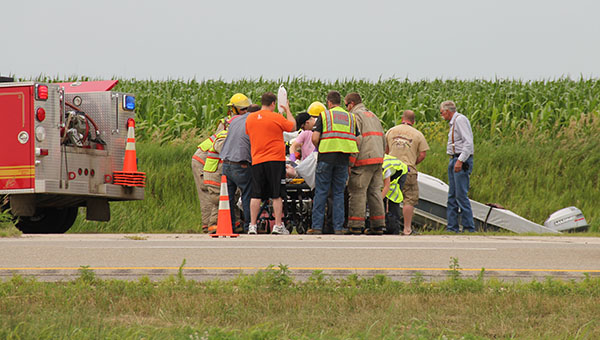 CLARKS GROVE — An East Peoria, Ill., man was seriously injured Saturday when the pickup he was driving while hauling a fishing boat lost control on southbound Interstate 35 about a mile south of Clarks Grove.

Richard J. Story, 71, and Julie Story, 66, were headed south on I-35 when the driver, Richard, lost control, according to a Minnesota State Patrol report. The maroon 2011 Ford F150 pickup rolled onto its side and into the west ditch near a vacant weigh station. The boat ended up on top of the truck.

The call for help from first responders came around noon Saturday.

Julie Story, a passenger also from East Peoria, suffered no apparent injury, the report states. It does not indicate whether she was married to the driver.

Richard Story taken to St. Marys Hospital in Rochester. Gold Cross ambulances and a Mayo One helicopter arrived at the location.

The State Patrol report said the driver and passenger were wearing seat belts but no airbags deployed. Alcohol was not a factor. The roadway was dry.

The vacant weigh station is at milepost 17. As of Monday morning, Richard Story was in serious condition.