Funeral services for Marian Ebba Hanson, 87, will be at 2 p.m. Thursday at United Methodist Church in Glenville. The Rev. Deb Miller will officiate. Interment will be at Greenwood Cemetery. Visitation will be one hour prior to the service at the church.  Online condolences are welcome at www.bayviewfuneral.com. 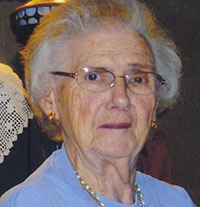 Marian Ebba Hanson was born April 17, 1927, to Nels and Ebba (Hansen) Ericksen in Albert Lea. She grew up on the family farm in rural Albert Lea and attended Albert Lea High School. Marian was united in marriage to Albert Hanson on Dec. 29, 1946, at Trinity Lutheran Church in Albert Lea. Together, Marian and Albert made their home in Glenville. Marian enjoyed being a housewife and raising her children. She later worked for Carol George Industries.

Marian was a member of United Methodist Church in Glenville where she had served as president of UMW. She enjoyed carrying a conversation while crocheting wonderful doilies, table cloths, bedspreads and much more. Marian was a recipient of blue ribbons for bread baking at the Minnesota State Fair. She enjoyed volunteering for the Greenwood Cemetery Association, reading, spending time with her grandchildren and baking — especially on hot days in the summertime!

Marian was preceded in death by her parents, Nels and Ebba; husband of 64 years, Albert; brother, Bob Ericksen; and father and mother-in-law, Berger and Emma Hanson.