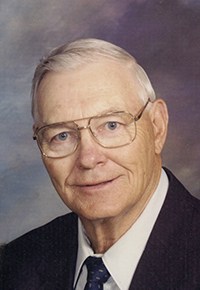 Funeral services will be at 1:30 p.m. Saturday at Salem Lutheran Church in Lake Mills with the Rev. Randy Baldwin officiating.

Visitation will be from 5 to 7 p.m. Friday at Mittelstadt Funeral Home, 902 E. Main St. in Lake Mills, and again at the church one hour prior to the service.

Burial will be at Salem Memorial Cemetery in Lake Mills with military rites by Lake Mills American Legion Post No. 235.

He grew up on the family farm, attended grade school at Clark Country School and graduated from Joice High School in the class of 1947, where he lettered in baseball and basketball his junior and senior years. He continued to play baseball for the Lake Mills Legion Club and later Emmons and Lake Mills city teams. He also loved to play softball for his church team. He was proud of being a catcher with Jim Tweed all those years as the pitcher.

Max was proud to have served his country during the Korean conflict from 1951 to 1953. After Max’s return from his years in the armed service, he and Margie Thrond were married at Bethany Lutheran Church in Thompson, Iowa, Oct. 17, 1953.

Max loved attending his children’s and grandchildren’s sporting events and was proud of their teams’ successes. He loved working with youth in Cub Scouts, Boy Scouts and 4-H. He also offered to teach Sunday school but told his wife later he would keep order if she gave the Bible lesson. He loved raising livestock and took good care of the newborns. He brought them in the house to warm them in ice storms. He was a substitute school bus driver and he loved greeting the kids. He enjoyed the young teens when they helped him bale hay or whatever the task. Ed, Randy and Carlyle probably remember his work habits.

He believed in progression and served the city for two terms as councilman from 1976 to 1984. He served as commander of the Joice American Legion. He loved hunting and spent the entire season with Marlin Anderson, besides several trips out west with family and other hunting friends, brother-in-law Truman, the Rev. Dalen, the Evenson family and many others. He was in the livestock buying and trucking business in Joice for many years. He later started trucking for the new tile plant in Lake Mills, Certain Teed Daymond.

After he retired as a farmer and businessman, he began delivering motor homes for Winnebago. His main driving buddy was Leo Schmidthuber. He later was promoted to inspecting the motorhomes for the dispatch offices of Morgan Driveaway and later Bennett in Forest City. He accompanied his wife at several nursing conventions and wondered what she told people to get him entrance at the individual sessions — since he wasn’t a nurse. His wife told him that she told them, “You have beginning Alzheimer’s and can’t be alone.” He always responded with just an, “Oh.”

He loved interacting with people and appreciated the care and attention given by staff at Lutheran Retirement Home.

He was preceded in death by his parents, Lyle and Thelma Brones.