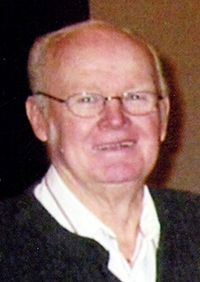 Memorial services will be at 9 a.m. Saturday at Silver Lake Lutheran Church in rural Northwood with the Rev. Randy Baldwin officiating.

Family will greet friends at a gathering from 5 to 7 p.m. Friday at Mittelstadt Funeral Home, 902 E. Main St. in Lake Mills, and then again before the service at the church.

Mervil “Red” Burnell Christian was born July 10, 1924, in Freeman Township, Freeborn County, the son of Melvin and Bertha (Larson) Christian. He attended school at and graduated from Emmons High School.

Red served his country during World War II in the United States Navy.

On May 28, 1948, Red was united in marriage to Betty Lou Ashpole at Silver Lake Lutheran Church. Together they farmed in the Emmons area and raised their family.

Red was devoted to his family and loved farming. Red also took great pride in his involvement as a treatment technician at Fountain Centers in Albert Lea.

He is survived by his loving wife, Betty, of Emmons; his children Victoria (Frederick Ostrowski) of Otsego, Judith (Larry) Christensen of Albert Lea, Michael (Marlene) Christian of Northwood, Kurtis Christian and Mark (Sharon) Christian, both of Albert Lea; son-in-law, Mike Haskins, of Austin; sister, Lila Harris, of Minneapolis; along with many grandchildren and great-grandchildren.