Optimism and spunk come to Albert Lea in “Annie, The Musical” 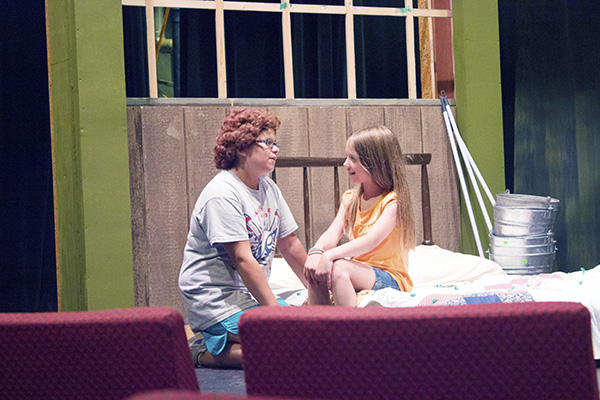 Some new and familiar faces will be coming on stage this month with Albert Lea Community Theatre’s production of “Annie, The Musical.”

In fact, about one third of the cast will be new faces, director Gordy Handeland said.

Handeland is one of the familiar faces with the show. He has been with Albert Lea Community Theatre for a while as both an actor and a director, and has even acted in “Annie” multiple times, the first of which was in 1989.

The cast is very diverse, with a wide range of ages and experience levels. The youngest member is 8 and the oldest are in their 70s, and about a third has never been in a production this extensive, Handeland said.

One cast member who is not new to the stage is Charley Fleek, who plays the main and titular character Annie.

Fleek, 13, has been acting since she was 6. She has participated in community theater as well as fall plays with her school. Some of the past shows she has acted in are “The Sound of Music,” “The Best Christmas Pageant Ever” and “Meet the Creeps.”

Despite not being a novice actress, the role of Annie is her first lead role. She said she was excited, but nervous.

“I can’t believe I got the part,” she said, noting that there were many amazing actresses who tried out.

Fleek, and many of the other principal actors, said rehearsal has been going well.

“Annie” is a large cast play that features a lot of children, and many of the adult actors said that it has been interesting and fun to work with such a diverse cast.

Jason Howland, who plays Daddy Warbucks and is president of Albert Lea Community Theatre, said it’s been a lot of fun to work with so many kids. Cheyenne Severtson, who plays Lily, and Dylan Kaercher, who plays Rooster, agreed.

Severtson, 16, has been acting since she was 8 and Kaercher, 20, had his first role in kindergarten as Tiny Tim in “A Christmas Carol.”

Kaercher is from Austin, and this is his first time acting in a musical in Albert Lea. He also helps with choreography in the production, and said that the children picked up the dances very quickly.

Severtson said the kids are a good bunch and that they know when to act professional and when to have fun.

Emily Troe, who plays Daddy Warbucks’s secretary Grace Farrell, has never worked with a cast this diverse and said that all of the kids bring a lot of energy and fun.

For some of the actors, “Annie” is giving them a chance to be daring and try new roles.

Elizabeth Harty plays Ms. Hannigan, the mean orphanage matron. Harty said that Ms. Hannigan is a part that people love to play because it’s a fun role, even though Ms. Hannigan spends most of her time yelling at children.

This is Harty’s first time acting in “Annie” and also her first play back in Albert Lea. She moved away for about 22 years before returning, but her first play with Albert Lea Community Theatre was “Oliver” in the 1970s.

Severtson also said she has a chance to try a new role in her part as Lily St. Regis, Rooster’s girlfriend who helps him try and con some money out of Daddy Warbucks. She said Lily is her first “ditzy” role and that it has been interesting to try out a new character.

Howland is also new to “Annie” and is taking daring and dedication to a new level — for his part as Annie’s billionaire adopted father, he must shave his head to fit the role.

In fact, Howland said that for two shows he will be gone so Handeland will be filling in as Daddy Warbucks. Handeland has acted as Warbucks in the past and just like Howland, he’ll be shaving his head.

Annie opens on Thursday, and while there are only a few rehearsals left, Harty and the rest of the cast said that the show is going to turn out great.

“Everything comes together,” Harty said.

What: “Annie, The Musical”

Where to buy: The ACT Call Center at 1-877-730-3144, www.actonbroadway.com, the box office or the Albert Lea Convention and Visitors Bureau