Orville H. Paske, 92, of Albert Lea, previously of Edina, died Monday, July 7, 2014. Funeral services will be at 1 p.m. Saturday at Bruss Heitner Funeral Home in Wells. Visitation will be one hour prior to the service at the funeral home. The Rev. Joel DeNeui will officiate, and interment will be in Rosehill Cemetery in Wells. Please see www.brussheitner.com to leave online condolences. Bruss-Heitner Funeral Home in Wells is in charge of arrangements. 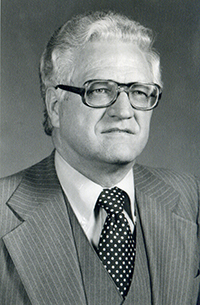 Orville was born Feb. 1, 1922, in Wells, the son of Henry Carl and Myrtle Annora (Roberts) Paske. He graduated from Wells High School in 1940, and went on to be a laborer with the Lansboro (Musser) Poultry Co. in Wells. Orville also was a salesman for Palace Furniture Co. of Albert Lea, a licensed funeral director with Peterson Funeral Chapel and went on to own and operate Orv’s Superette with his wife, Alice. In 1957 he started with National Cooperatives Inc. and advanced to senior vice president with the successor firm, Universal Cooperatives Inc. of Minneapolis. After retiring, Orville graduated in 1986 from Normandale College magna cum laude with a degree in psychology/liberal arts.

On Sept. 7, 1942, he was united in marriage to Alice Jane Dulas at his home in Wells.  To this union, two sons were born. Orville resided in Albert Lea for 27 years before moving to Ohio, where he lived for five years. He returned to Minnesota, making his home in Edina, Northfield and Albert Lea for the last 25 years.

He was a member of the Albert Lea Rotary Club, the Salvation Army advisory board, YMCA, Naeve Hospital Association United Fund, Chamber of Commerce, Christian Laymen, Youth for Christ, Phi Theta Kappa, U.S. Advisory of the United Nations’ Food and Agricultural Organization and a director with the Minnesota Association of Cooperatives.

He was affiliated with the Wesleyan Methodist Church of Albert Lea and the Colony Park Church of Edina as a speaker, song leader and vocalist. Orville was also active in Christian radio. As a committed Christian, his primordial purpose in life was to empathize that (Phil. 1:20) “Christ shall be magnified in my body, whether in life or in death.”

Orville is preceded in death by his loving wife of 61 years, Alice; and his parents.

Orville is now free of his earthly cares and life’s burdens and can attest to the Apostle Paul’s admonition that being (Phil. 1:23) “with Christ which is far better.”