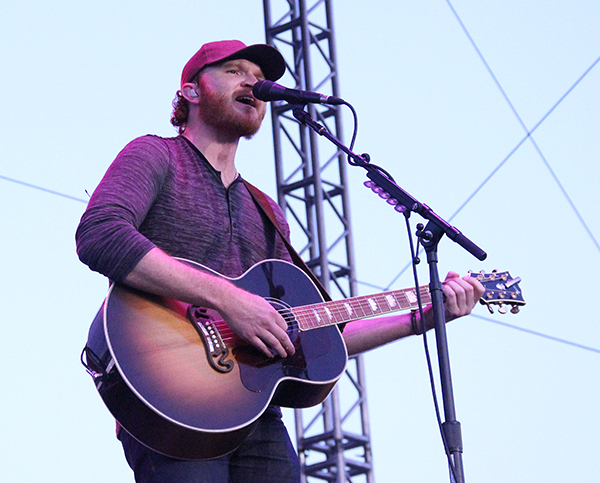 Eric Paslay opens for the Freeborn County Fair and sets the bar high for the rest of the fair’s entertainers. – Jacob Tellers/Albert Lea Tribune

Country singer-songwriter Eric Paslay kicked off the Freeborn County Fair with a selection of songs about love and faith from his self-titled debut album, which debuted Feb. 4.

As the first of five country singers visiting the fair each evening this week, Paslay set a high bar with a strong, clear performance.

Leading on the acoustic guitar, Paslay began the night with “Like a Song,” playing through many songs from his debut album before finishing with his 2013 hit single “Friday Night,” which brought the ground-level section of the audience to their feet.

In the lead-up to “She Don’t Love You,” Paslay said the goal for his album was to sound like real life.

“We all have a rhythm,” Paslay said, comparing a music album to a heartbeat. “We like those fast songs, but you also have to have the slow ones.”

The acoustics setup was superb with the song quality being clear from all parts of the Grandstand.

Paslay’s voice was distinct and understable above the music regardless whether he was singing the slow ballads like “She Don’t Love You” or his upbeat hits “Friday Night” and “Song About a Girl.”

The crowd got in on the action a few times when Paslay stopped to let the audience sing along with some of the lines.

Paslay said he had written “Deep As It Is Wide” eight to nine years ago but had never had the chance to release it. The lesson in patience paid off when he was able to record the song with country stars Amy Grant and Sheryl Crow.

Campbell and Lee joined Paslay for several rousing instrumentals at the center of the stage during songs.

Attendance was free for the first concert of the county fair. The Grandstand and seating in front of the stage was full with the exception of a couple rows in the back. More than a hundred fans lined up afterward for autographs.