Richard L. Tracy, 71, resident of Lake Park, passed away peacefully on Thursday, July 24 at his home in Lake Park.

A celebration of Dick’s life will be held Tuesday at 10 a.m. in Bonnerup Funeral Home in Albert Lea. Visitation will be held one hour prior to services. 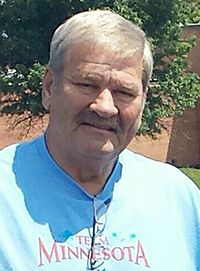 Dick was born in Lemmon, S.D., to James and Catherine Tracy. He attended school in Pine City and later moved to Dell Rapids, S.D., where he graduated, he then attended Sioux Falls College in Sioux Falls, S.D., graduating with a Bachelor of Science degree.

On Feb. 19, 1966, Dick was united in marriage to Sheryl Beckmann of Westbrook. Together they lived in Ellendale. For 25 years Dick taught physical education and health. Dick coached all sports at various levels. He taught firearm safety classes, was one of the original founders of the Ellendale Ambulance Service and served many years on the Ellendale Fire Department. He retired from teaching in 1991 and moved to Lake Park, where they owned and operated Tracy’s RV Park until retiring in 2006.

Dick enjoyed hunting, fishing and the outdoors, but most importantly spending time with his grandchildren, attending their sporting activities and spending quality time.