Funeral services for Roy Junior Stevens, 89, of Albert Lea will be at 2 p.m. Friday at First Lutheran Church in Albert Lea. The Rev. John Holt will officiate. Interment will be at Hillcrest Cemetery. Military honors will be accorded by local servicemen’s organizations, VFW and the American Legion. Visitation will be from 5 to 8 p.m. Thursday at Bayview/Freeborn Funeral Home and one hour prior to the service at the church.  Online condolences are welcome at www.bayviewfuneral.com. 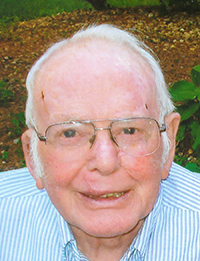 On May 20, 1944, Roy was united in marriage to Bernice Hillman at United Methodist Church in Albert Lea. In 1945, Roy was drafted into the United States Army as a teletype operator. He received the victory medal, Asiatic Pacific Theater Ribbon, overseas service bar, army of occupation medal and meritorious unit award while serving during World War II. Roy was stationed in Japan.

Roy worked as a laborer at Wilson & Co. for 38 years. Roy was a member of the Eagles, the Elks, the Moose, the VFW and First Lutheran Church since 1944. He had a special gift for music and enjoyed singing, playing the harmonica and accordion. Roy had a green thumb and loved to garden, especially roses. Roy also enjoyed refereeing family sporting events, working on cars, flipping houses with his son, Scott, fishing and working and farming on his acreage. Most of all, Roy cherished the time spent with his family and dog, Molly.