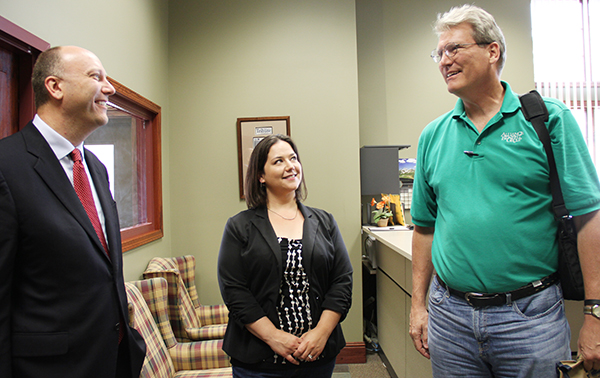 Seifert, of Marshall, stopped in Albert Lea to find out more about the company, its strengths and challenges and to take a look around the downtown business.

The gubernatorial candidate asked about state taxes and regulations and how they have impacted the employee benefit company’s decisions.

Mariah Lynne, vice president of client relations with ABG, said the employee benefits company was started by Albert Lean Al Arends in 1984 as Arends & Associates and presently has 142 employees, 80 percent of which are women. It is made up of administrative and advisory arms.

ABG is always looking to add more employees, she said, but is facing space limitations at its present location at the corner of Clark Street and Newton Avenue.

Despite the higher taxes and regulations in Minnesota, she said she doesn’t think the company would ever move away from Albert Lea because it is rooted here.

“When you’re in a small community, you’re attached to the families,” Lynne said.

Seifert congratulated the company on a series of state and national awards it has received, which are posted on one wall in the front office. One of those is the Best Place to Work Award, given out at the end of April by Workforce Development Inc.

“It was a tough loss for the community,” Dorman said.

Seifert is the only gubernatorial candidate based outside the Twin Cities and has worked as a high school teacher, university admissions counselor, real estate broker, executive director of a health care foundation and small business owner.

The winner will face off against DFL Gov. Mark Dayton.

It was Seifert’s fourth time stopping in Albert Lea since Thanksgiving. He was last in Albert Lea on June 4, just days after the heated state Republican convention.

Though he did not win the endorsement, at that time he stated he planned to move “full steam ahead” with his campaign.

During this stop Tuesday, he encouraged people to vote early in the primary election. Absentee voting has already begun.