Sharon Kay Weckwerth, 66, of Waseca died on Friday, July 18, 2014, in Waseca County as a result of injuries sustained in an automobile accident.

Born on June 10, 1948 in Waseca, she was the daughter of Milo and Edna (Gehloff) Roeglin. She attended school in Albert Lea and Monticello, Iowa. Following school, she worked in road construction as a flagger and also bartended for several years in Waseca. 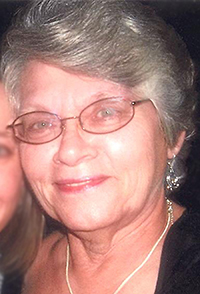 She married Stephan “Tippy” Weckwerth on Nov. 4, 1972, in New Richland. Sharon later worked at Quiram’s Bakery, Country Neighbors, New Richland Ambulance and Brown Printing. Most recently, she was employed at Wal-Mart in Waseca for 12 years. Sharon had been active with Relay for Life. Her biggest enjoyment was spending time with her grandkids. She also enjoyed sewing, playing pool, Scrabble and bingo, crossword puzzles, lottery scratch offs and Elvis.

She is survived by three children, Stephanie Weckwerth and Jeremy Peterson of Hartland, Milo Weckwerth of Hartland and Sheena Weckwerth and Jeff Cords of New Richland; five grandchildren, Garrett and Connor Weckwerth and Ashton, Alexander and Cooper Cords; and two grandpuppies, Jynx and Oreo. She is also survived by her mother, Edna Roeglin, of Anamosa, Iowa; three sisters, Betty Hunter of Anamosa, Diane (Alan) Lewer of Waseca and Linda (Ray) Iben of Springville, Iowa; and several nieces and nephews.

She was preceded in death by her father, Tippy; son, Matthew; and one sister, Judy Zimprich.

Visitation will be from 4 to 8 p.m. Tuesday at Dennis Funeral & Cremation Services in Waseca and will continue on Wednesday one hour before services at the church.