Funeral services for Shirley J. Gold will be at 10 a.m. Saturday at Grace Lutheran Church in Albert Lea. The Rev. Richard Spande will officiate. Visitation will be from 5 to 8 p.m. Friday at Bonnerup Funeral Service and one hour prior to the service at the church. Interment at a later date will be in Graceland Cemetery. 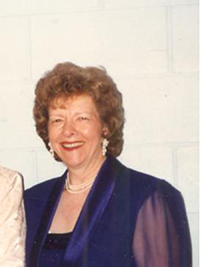 Shirley was born Feb. 21, 1928, in Alden, the daughter of Harry and Jessie (Toenges) Steele. She graduated from Alden High School in 1946 and attended cosmetology school in Mankato. In 1948 she was united in marriage to J. Gordon Gold who preceded her in death.

Shirley was a lifetime resident of Freeborn and Mower counties and a member of Grace Lutheran Church in Albert Lea. She farmed in the Hayward and Alden areas for many years and worked at Nelson’s Beauty and Barber in Albert Lea. Most of her adult life was spent as a waitress in the Albert Lea and Austin areas.

Shirley was a member of the Eagle’s Club and the Singles and Solos of Mower County where she served as president for 35 years.

She loved to dance and in 1995 she met Dick Langerud at a Halloween dance. She asked him to dance and they have been dancing ever since. Shirley enjoyed travel and spent many winters in Texas. Family was very important and she loved being with the grandkids.

She was preceded in death by her parents; grandparents; husband, J.Gordon; brothers Chester and Raymond Steele; and sister-in-law, Violet Steele.