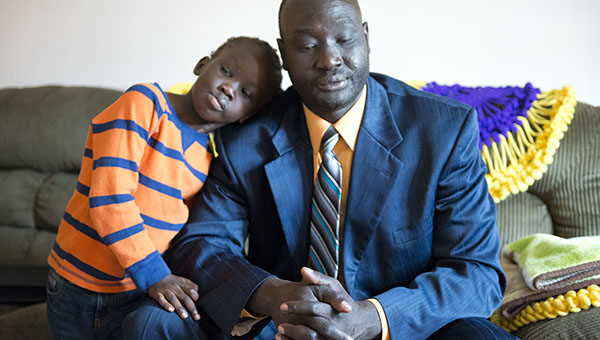 Dabang Gach, pictured with his son Keat Ruot, 5, fled South Sudan when he was 15 due to the civil war. He, along with many others, traveled on foot to a refugee camp in Ethiopia. Gach said it’s important to him that his children know their history and know what their parents experienced to give them a life in the United States. — Colleen Harrison/Albert Lea Tribune

They came to Albert Lea from wartorn lands

Editor’s note: This is the first in a three-part series about refugees living in Albert Lea.

When 42-year-old Dabang Gach was 15 years old, he fled his country, and he never returned. 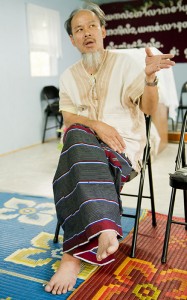 Tha Htaw describes how the language barrier made earning his drivers license more difficult. Htaw had to take the test at least five times before getting his license. — Colleen Harrison/Albert Lea Tribune

Gach is from southern Sudan, which in 2011 became the country of South Sudan. He left on foot with his family and walked day and night through forests and brush until they arrived in neighboring Ethiopia.

Fleeing Sudan because of civil war, they entered a refugee camp, where they found limited food and schooling.

Given the opportunity to move to the United States on Aug. 11, 1989, Gach said he first arrived in Washington, D.C. He later moved to Omaha, Phoenix and finally Albert Lea in 2010.

“When we came to the United States, it’s more different from where I was, very secure,” Gach said. “I can find a job to support myself and support my kids, also.”

He said people like to come to Albert Lea.

“It’s beautiful and a nice and clean area, not too crowded,” he said. 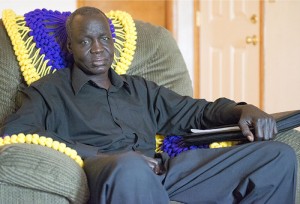 He is married with three children, ages 5, 3 and 1. A fourth child lives in Alaska.

Gach is one of an estimated 350 refugees from South Sudan and Burma who have moved to Albert Lea in the last 10 years.

United Way of Freeborn County Executive Director Ann Austin estimated 250 of the 350 fled from Sudan to the United States because of the decades-long civil war, and about 100 people known as the Karen fled Burma and refugee camps in Thailand.

An additional 150 Karen people commute from St. Paul to Albert Lea each day for work at Albert Lea Select Foods. 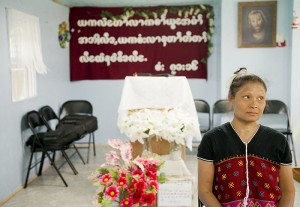 Pah Mu sits in a trailer used for Sunday worship services in the local Karen community. Many of her people, referred to as Karen, fled Burma to refugee camps in Thailand before making it to the United States. — Colleen Harrison/Albert Lea Tribune

The Karen are an ethnic group from the mountainous border regions of Burma and Thailand who were subject to persecution and ethnic cleansing by the military-backed Burmese government, which calls the country the Republic of the Union of Myanmar. Ceasefire deals were brokered in early 2012.

“Both refugees as communities are very humble and caring,” said Allyssa Sorenson, coordinator of the Volunteers in Service to America locally. “They want to be successful.” 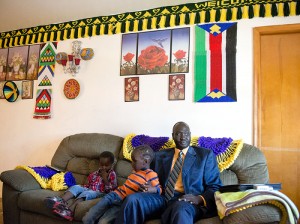 Dabang Gach came to the U.S. from an Ethiopian refugee camp in 1989. He first lived in Washington, D.C., then Omaha and Phoenix, before moving to Albert Lea in 2010. — Colleen Harrison/Albert Lea Tribune

While some of the refugees said they came to Albert Lea for work, others have come because of family or community connections. Running from danger for most of their lives, they said they are grateful for what the city offers as a safe and secure environment for themselves and their families — though it does have its challenges.

Simon Dup, 47, was the first South Sudanese refugee to move to Albert Lea in 2003.

Dup said he left Sudan as a young boy and lived in a refugee camp in Ethiopia while the people of his country were engaged in what he described as a war between Muslims in the north and Christians in the south.

When he came to Albert Lea from Des Moines with his wife, Mary, and five of their children, he said he was welcomed by church communities such as Zion Lutheran Church. 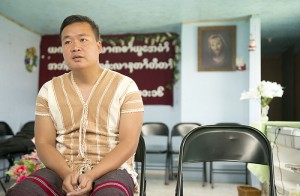 Wah Paw acts as an interpreter for many in the local Karen community. Paw learned English and learned how to read and write while in a refugee camp in Thailand before coming to the United States and is now a success coach within the Albert Lea schools. — Colleen Harrison/Albert Lea Tribune

Dup attended Concordia Seminary and now leads Sudanese congregations of his own in both Albert Lea and Austin.

He has worked at Walmart, Home Depot and Hy-Vee and unlike many other local Sudanese has gained his U.S. citizenship, which he described as difficult.

Dup has returned to Sudan six times, the most recent time in 2013, taking donations of about $10,000 to build a school for the children of Malual, which was destroyed. 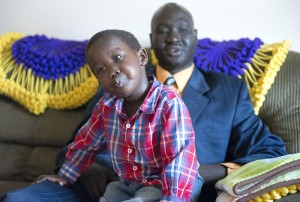 Junup Ruot, 3, sits on his father’s lap as Dabang Gach describes the opportunities he didn’t have growing up that he hopes his children will as they grow up in Albert Lea. Most of Gach’s childhood was spent fleeing conflict in South Sudan or in an Ethiopian refugee camp. He didn’t have access to schooling as a child, and clean water and food were scarce at times. –Colleen Harrison/Albert Lea Tribune

Tha Htaw, 57, who speaks some English but spoke mainly through an interpreter, said he moved to St. Paul from a Karen refugee camp in Thailand in 2008, where he lived for more than 20 years, after fleeing Burma because of civil war. He said he and his family moved from place to place before arriving in the refugee camp.

“I don’t think many people realize the duress they were under,” Austin said.

Htaw’s wife, Pah Mu, 55, who cannot speak English, said people in Burma lived in huts made of bamboo and had to run through the forests for their lives.

People were not used to living in a culture with structure, let alone electricity, appliances and other electronics.

“It takes a little while, but they’re learning,” Austin said.

About four years ago, the family moved from St. Paul to Albert Lea. At that time, Mu worked for Albert Lea Select Foods. 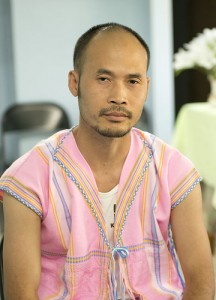 Hay Tha moved to Albert Lea two years ago from Des Moines and lives with his wife and mother-in-law. — Colleen Harrison/Albert Lea Tribune

Though she no longer works there, Htaw said they stay in the city because they enjoy the lakes and parks. His wife likes to fish, and his son also works here.

Htaw has nine children, six of whom live with him in the family’s home on Clark Street.

Austin described Htaw as being “one of the best advocates for the Karen community,” as he offers help to others to get their driver’s licenses or sign up for bank accounts.

Another person who has helped the Karen community is Wah Paw, 27, who lived in New Jersey and St. Paul before moving to Albert Lea in 2010.

Though he used to work for Albert Lea Select Foods when he first moved to town, he is now a success coach for Albert Lea Area Schools, helping the Karen students and their families throughout the district. Speaking both Karen and English, he has an office at Halverson Elementary School and travels to all of the schools. He also translates for Karen families visiting the Freeborn County Department of Human Services.

Paw said before life in the United States, life was difficult in Burma. There were no schools, and most people did not have the opportunity to read or write. 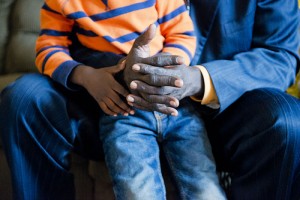 Dabang Gach’s son Keat Ruot, 5, holds his father’s hands as Gach recounts what life was like in South Sudan before coming to the U.S. as a refugee. — Colleen Harrison/Albert Lea Tribune

Though he learned to read and write in English in a refugee camp in Thailand, he said he felt like a prisoner there. He is grateful to be in Albert Lea.

Despite the hardships the refugees went through to get to the United States, Dabang said he wants his children to know where he came from.

“It’s good to know the story, where Dad came from,” he said. “We don’t call ourselves African. We are African American.”

On Monday, in the second installment of the “Seeking Refuge” series, read what the Sudanese and Karen refugees are doing in Albert Lea.