Across the Pastor’s Desk, by Todd Walsh

Today is Independence Day, the celebration of the 238th year of American independence. The celebration will include hot dogs and hamburgers, potato salad (Mrs. Gerry’s!) and a pop, sparklers and fireworks, ball games and lawn chairs, parades and ducking for cover from passing showers. I would imagine also that in some places some or all of the Declaration of Independence will be read in public. 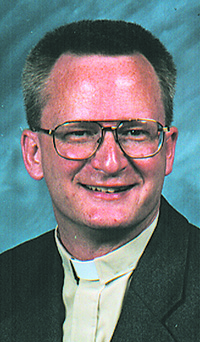 Not many years ago it was a chore to get hold of a copy of the Declaration of Independence. You had to dig into an old text book or a now extinct encyclopedia. Now all we have to do to read this masterful work of American scripture is ask our smartphones to show us the text of it. If you don’t have a smartphone, an old text book or encyclopedia is still pretty smart too.

I hope you will take a few minutes in the next few days to read the Declaration of Independence. Mind you, it is long. I’ll give you a hint. The beginning and the end are an easy and good read. The middle is the complaints against the British Crown and Parliament and its gets a little heavy.

The final sentence of the Declaration of Independence stands out for me. “And for the support of this Declaration, with a firm reliance on the protection of divine Providence, we mutually pledge to each other our Lives, our Fortunes and our sacred Honor.”

That final sentence points to faith in God. There was a higher power directing and guiding the actions and lives of the drafters of the declaration. That higher power gave them vision and courage.

Note that the final sentence also points to the importance of the relationships among the people. The Declaration of Independence was written by a diverse group of men (their wives were also writing them letters telling them how to get it right; Abigail Adams was among those who insisted, without success, on giving women the right to vote) who decided to make a life and nation together. They committed themselves to learning to live and work together.

There is a passage in Galatians that is one of my favorites for its play on words. It speaks of freedom and the importance of freedom together. Galatians 5:13-15 reads, “For you were called to freedom, brothers and sisters; only do not use your freedom as an opportunity for self-indulgence, but through love become slaves to one another. For the whole law is summed up in a single commandment, ‘You shall love your neighbor as yourself.’ If, however, you bite and devour one another, take care that you are not consumed by one another.”

The freedom named in the passage is freedom from the belief that you can earn God’s favor with your own actions. The danger of trying to earn God’s favor is that it can’t be done; we easily lie about our own actions to look good and quickly point out the faults of others to make them look bad so we look good without much effort. In our clambering to look good before God, we easily trample over our neighbors, most often the most vulnerable.

We are now moving into a season of clambering and trampling. We are moving into the campaign season for the midterm election. We will complain about the attack ads but the people who make those ads know we pay attention to them. We are unfortunately very good at demonizing opponents and fixating on laying blame rather than seeking solutions. Not much gets done when Democrats blame Republicans and Republicans blame Democrats. Election Day will come and we may not know much about what candidates will do or what they stand for as how low candidates can get. I’m inclined this year to vote for any candidate who will support raising Main Street three feet in front of Godfather’s Pizza.

On this Independence Day let me offer some words for every day. Thank God for freedom. Thank God for our freedom as a nation. That freedom gives us the ability to make a life and grow in life. Thank God also for the freedom of forgiveness. We can start over. We can begin anew. We can find a way forward.

Thank a public official. They are giving of themselves for us. It is not an easy job. The pressure is huge. The hours can be unhealthy. And everyone else seemingly knows how to do it better.

Thank our service men and women, those who serve now and those who have served. These are people who have given of their lives for our lives. Some have died so that we can enjoy the lives we have in America; their memory and their families deserve our esteem. The veterans of World War II are leaving us quickly and they have earned our admiration and respect, just as those who served in Korea, Vietnam, Iraq and Afghanistan. I believe part of thanking them is to make sure the Veterans Administration health system becomes a model instead of another scandal.

Sign up. The men who signed the Declaration of Independence knew they were potentially signing their death warrants for treason against a tyrant king. They paved the way for us to do the same in a much safer way, to sign up and be a part of the life of this nation. We have neighborhood and parent groups. We have levels of government that need our participation, prayer and input, everything from township, city and county, to state and federal offices.