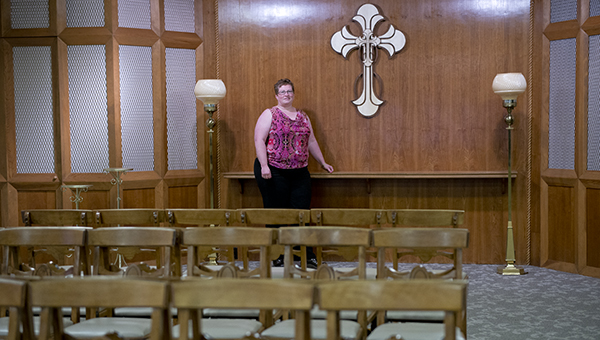 Licensed mortician Sue Nasinec owns Bruss-Heitner Funeral Homes, which are located in Wells and Bricelyn. She’s worked there since 1987, when she started as an intern, and has been the owner since 2008. – Colleen Harrison/Albert Lea Tribune

‘This is my dream’

WELLS — Sue Nasinec has known what she wanted to do for a living since she was in the seventh-grade, and the fact that some of her classmates found her chosen mortuary profession a bit out of the ordinary has never phased her. 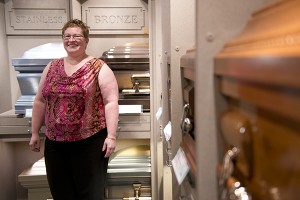 Sue Nasinec stands in a showroom of the Bruss-Heitner Funeral Homes location in Wells. Nasinec has been a mortician for almost 20 years, and is currently licensed in both Minnesota and Iowa. – Colleen Harrison/Albert Lea Tribune

Nasinec is a licensed mortician, and owns the Bruss-Heitner Funeral Homes in Wells and Bricelyn. She started interning with the funeral home, then owned by Stan and Kathy Bruss, in 1987 after graduating with her Bachelor of Science degree in mortuary science from the University of Minnesota. She and her husband, Nathan, bought the business in 2008.

In Nasinec’s seventh-grade class, she interviewed two local morticians, Howard Frederick and David Bonnerup, for a school report. She was fascinated. Nasinec took her classmates to Bonnerup’s funeral chapel and showed them a hearse, an embalming machine and other tools of the trade. She earned the highest grade in the class.

“It was always interesting to see people’s reactions in high school when I told them what I wanted to do,” she said.

Some of her classmates that she’s kept in touch with still remember that seventh-grade field trip. “They’re not surprised I’m doing what I’m doing,” Nasinec said. “They say, ‘The way you talked about it, we knew you were going to do it.’”

For Nasinec, each day as a mortician is different and interesting, from the work she does to the requests she hears. She’s heard of people requesting to be buried with their cars, and one widow had her husband buried with the TV remote that he seemed to spend hours looking for when he was still alive.

One of the most rewarding aspects of Nasinec’s job can also be the most challenging: working with people. She’s been in this community long enough to establish close friendships, and some of the people that come in to make arrangements are people she knows.

“It’s hard and easy,” she said. “But who better to take care of them than me? …I wouldn’t change that.”

A goal of Nasinec’s is to always look ahead, and to keep providing more personalized service. 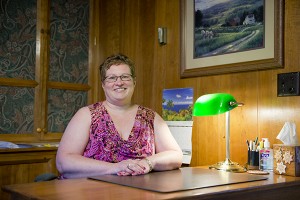 Sue Nasinec has known she wanted to be a mortician since she was in the seventh-grade. She said she interviewed two local morticians for a school report and was instantly intrigued. – Colleen Harrison/Albert Lea Tribune

For Nasinec, that means having a continuous education and constantly updating and keeping up with new regulations and services.

Nasinec lives in the house next door to the Wells funeral home with her husband and their three sons and prides herself on Bruss-Heitner being family owned and operated.

When asked if she thinks any of her sons will take over the family business, she’s doubtful.

“This is my dream,” she said. “I’m going to support them in theirs.”

Much further down the road, when it comes time for her to sell, Nasinec said that finding someone who will also be family-oriented in the business is important to her.

“When you dedicate your life and the community to it, you want to pass it on to someone who will also think that’s important.”

Nasinec is also proud of the fact that her funeral home has two women filling a position that’s in a generally male-dominated business. She does think that the field is becoming more even, and said that the last graduating class out of the University of Minnesota was about 50 percent female when it came to mortuary science.

“You have to be strong, be a leader and treat others how you want to be treated,” she said. “Do that and you’ll do fine.”