Wayne Keith Estes, 86, passed away Friday, June 27, 2014, at Lutheran Retirement Home in Northwood. Funeral services are scheduled for 10:30 a.m. Wednesday at First Lutheran Church in Northwood with the Rev. Judy Converse officiating. Burial will be in Sunset Rest Cemetery in Northwood. Visitation will be from 5 to 7 p.m. today at Schroeder & Sites Funeral Home in Northwood. 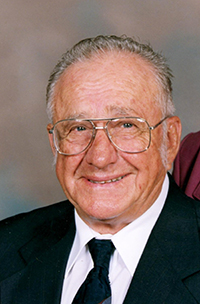 Wayne was born in Worth County, Iowa, on May 8, 1928, the son of William G. Estes and Selma Janette Olson Estes. Wayne was the oldest of seven children, being the brother of Clifton, Lloyd, Sheldon, Gilman, Harold and Sylvia.

Wayne grew up on a farm a few miles south of Northwood and began his own career as a farmer after marrying Dorothy Hillman on March 31, 1950, at the Little Brown Church in Nashua, Iowa. He spent the majority of his years farming northwest of Northwood. During that time Wayne began to pursue his passion for mechanic work. He first worked as a mechanic for Robert Patterson, who operated the Sinclair station in Northwood, and was later employed as mechanic and service manager for Boyd Implement. In the late 1960s Wayne began his employment as a mechanic and assistant service manager for Holiday Cars located in Austin. During his years as a mechanic he was a long time member of the Union of Auto Workers. While at Holiday Cars he began working nights and weekends in his privately owned shop, Estes Repair, which was located on an acreage seven miles east of Northwood. Upon retirement he continued to work in his own shop repairing cars, trucks, tractors and farm equipment for area farmers.

One of Wayne’s hobbies was working on and operating antique steam engine tractors, machines and boilers. He received a traction engineer’s license, issued by the state of Minnesota in 2000. Wayne was a working member of the annual Rollog Steam Show. From the early 1970s to the late 1980s Wayne also pursued a second hobby of raising show pigs in partnership with his son. During that span of time he raised and showed countless grand champions at various local shows and competitions.

However, of most importance in Wayne’s life were his faith, family and friends. He was a lifelong member of First Lutheran Church of Northwood where he was baptized, confirmed and worshipped on a regular basis. Wayne lived his life with a spirit of servitude and genuinely cared about others. As a couple, he and Dorothy were always the first to reach out to others in need.

They loved to travel, having visited most of the United States and Europe. They also enjoyed fishing, dancing and visiting with family and friends. Summers were regularly spent fishing the lakes of Minnesota. Wayne was also a 36-year member of the Fraternal Order of Eagles in Albert Lea where they spent many weekend evenings dancing to their favorite polkas and waltzes. He was a consummate storyteller and could make any conversation entertaining and enjoyable.

Wayne is survived by his wife of 64 years, Dorothy, and two of their three children, Kenneth (Connie) Estes of Northwood and Diane (Dale) Simon of Albert Lea. He is also survived by three grandchildren, Dr. Christopher (Dr. Meghan Higley) Estes of Portland, Ore., Carrie (Ben) Weston also of Portland and Amber (Aaron) Holt of Ankeny, Iowa; as well as four great-grandchildren, Elyse Catherine and Spencer Wayne Estes and Luke Isaiah and Lila Diane Weston, all of Portland. He is also survived by a sister, Sylvia Petersen, of Hanlontown, Iowa, and a brother, Harold (Kathy) Estes of Northwood. Wayne was preceded in death by his parents, four brothers and one son, Richard.