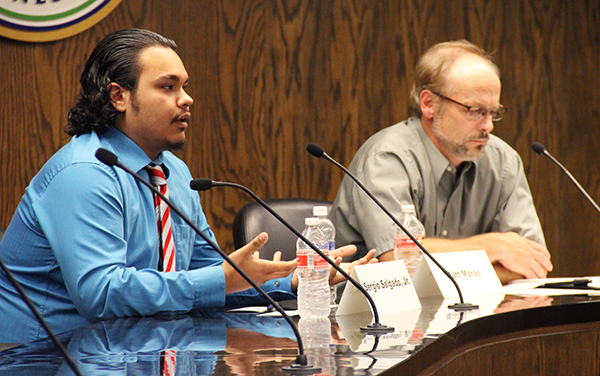 The following is a summary of issues discussed:

Maras said he moved to Albert Lea 30 years ago with everything in the trunk of his car.

He said he has worked hard to get to where he is today and credited blue-collared workers for building up his business.

He credited his background in finance and said if he is elected he wants to make sure everything makes sense.

“We don’t spend money because we have it,” he said. “I think it’s time to have a new look. I think I represent people well and think I get along with other citizens.”

Salgado said he has been a part of Albert Lea Community Theatre since his junior year in high school. He will turn 21 on Jan. 1.

He said he thinks it’s time for a fresh look in Albert Lea, and he wants to be a voice for those without a voice.

“I felt it was my turn to give back,” Salgado said. “I’m a firm believer if I had not moved to Albert Lea, I would not be in college right now.”

Maras and Salgado agreed that the downtown renovation turned out well and said they would have supported it if they had been on the council at that time.

Maras said he heard numerous positive comments about it during the car shows earlier this year.

“I think that says a lot for our city,” he said.

Salgado called the renovations “modernized” but noted they still preserved many of the historical settings as well.

The candidates were asked what they would do to establish relationships with leaders from Freeborn County and Albert Lea Area Schools.

Salgado said he would support face-to-face meetings with them, noting the importance of communication.

Maras said he would support a community forum once a month or once a quarter where people can ask questions of the officials in one setting.

Both candidates said they support the dredging of Fountain Lake, though Maras said he wished Albert Lea Lake could have been done first.

An outdoor enthusiast, Maras said he will be worried when it comes time to requesting additional state bonding money for that lake.

Salgado said he would support putting something recreational at the Blazing Star Landing, such as a place where children can go after school and learn how to play basketball or to read.

Most importantly, though, he said, he hopes for something that can draw businesses in to in turn put more money back into the local economy.

Once the lake is more usable, he said, he would like to see the area fill up with higher-income jobs. He said he would still have to look into whether a convention center would be a viable option.

Both candidates were asked who they would vote for if they could not vote for themselves.

Maras said he would vote for Brooks, noting Salgado’s lack of experience.

Salgado said he would support either candidate.

A statement from Brooks

Brooks, the owner of Brooks Safety Equipment, wrote a statement that Albert Lea-Freeborn County Chamber of Commerce Executive Director Randy Kehr read at the start of the debate.

Brooks said he thinks the City Council has made large steps forward in trying to improve the community, secure financial stability and try to build tax base.

“I feel I have always tried to represent the area and my constituents in their best interests,” Brooks said.

He noted despite the city’s successes, he thinks the city has come short in the improvements on the south side of town, and he would like to encourage extra efforts be made in the next few years on U.S. Highway 65 starting at the intersection with Interstate 35 and going north.

“People coming into town need to see Albert Lea is a beautiful city more than just driving around the lake,” he said. “I want to be part of this and show the homeowners and business owners in the 6th Ward that the area south of Front Street matters to me as I know it does to them.”

The debate was hosted by the Albert Lea-Freeborn County Chamber of Commerce with Tribune editor Tim Engstrom moderating.  It will be rebroadcast over the cable-access channel over the weekend.