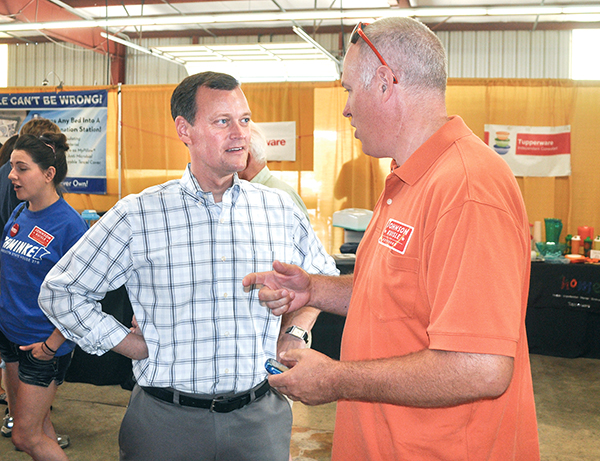 AUSTIN — Four Republicans are waiting to see who voters choose in the Tuesday primary to take on DFL Gov. Mark Dayton this November.

“A lot of it is just getting the message out to vote in the primary,” Johnson said Saturday at the Mower County Fair.

The four candidates have acknowledged they have similar positions on the issues of the day and have stressed other differences between themselves. Johnson, a Hennepin County Commissioner, said his campaign has worked to remind people of his track record uniting not only conservatives but independents as well in previous elections. He also said his campaign as the endorsed GOP candidate heading into the primary still meant he had a great chance to unite conservative efforts should he go on to face Dayton.

“It still means a lot to people,” Johnson said.

Zellers, who stopped in Austin Friday, touted his previous budget experience as a state representative and said his roots as a Minnesotan who worked for his success would translate in office to making Minnesota more competitive when it comes to bringing business to the state.

“I think Minnesota wants somebody who’s a lot like them,” Zellers said.

Honour’s campaign has reached out to residents in Albert Lea and Austin in the past few weeks and Seifert was in Austin in June to tout his experience as a former state representative.

The candidates have campaigned on relatively similar platforms. Each has acknowledged Minnesota’s economy as a huge issue and seek to “make Minnesota more competitive when it comes to jobs,” as Johnson put it Saturday.

Zellers also supports the PolyMet copper-nickel mining proposals and stressed more emphasis on deregulating taxes and other policies that would make border communities like Austin lose out on business opportunities to Iowa and other states.

Zellers is the only gubernatorial candidate to sign a pledge not to raise new taxes as well.

In recent weeks, Honour has pledged to freeze Minnesota’s minimum wage and cut an array of taxes if voters make him governor.

He also said he would lower income and corporate tax rates by unspecified amounts. He said he would attempt to get rid of a new income tax bracket for people who make at least $150,000 per year, which would require him to offset hundreds of millions of dollars in lost state revenue. He said some tax deductions could disappear.

On Friday, Seifert said he would find excess state funds to expand the state’s road system to relieve metro traffic congestion and repair and expand rural roads without increasing taxes.

Seifert said he would find more money for transportation by canceling all light-rail transit projects, locating efficiencies in the Transportation Department’s budget and reallocating dollars from other programs, as well as spending part of the state budget reserve.