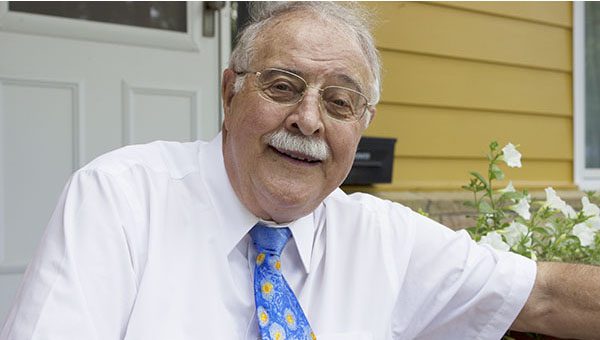 Milt Ost has lived in Albert Lea since the 1970s but is originally from North Dakota, which helped inspire his novel. – Hannah Dillon/Albert Lea Tribune

The story of Germans from Russia is not one often told, but one Albert Lean aims to change that with his historical novels.

Milt Ost, who moved to Albert Lea in 1971, hails from Beulah, a small city in western North Dakota. His family background plus a college roommate inspired him to write “Tumbleweeds Burning,” a historical novel about Germans from Russia. 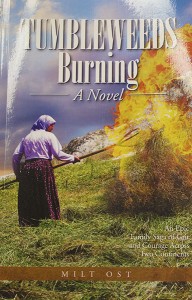 Ost roomed with John Polis, former Tribune sports editor in the 1960s, during their time at Wartburg College in Waverly, Iowa. Polis was from Latvia and his family became refugees after World War II.

Polis and his family found each other after being displaced by the war and ended up in Kiester, Ost said. The two met in university and Polis ended up taking Ost to Latvia to see where he was from.

Ost said this was one of his inspirations to write the novel. His own family is from the Black Sea area, which is bordered by Russia and modern day Ukraine.

In the 1800s, Russia was threatened by advances from Turkey, Ost said. In order to create a shield against the attacks, the Russian czar invited Germans to live around the Black Sea and tempted them with free farmland, Ost said.

This is the premise for his novel. In the book, Heinrich and Anna Marie Oster are invited to live in Russia; unbeknownst to them, they were invited for the sole purpose of becoming a shield in the event of an attack from the Turks.

One of the Osters’ sons was selected to join the Imperial Hussars, or the czar’s elite bodyguard. Things were going very well for the family until corruption, greed and persecution reared its ugly head. 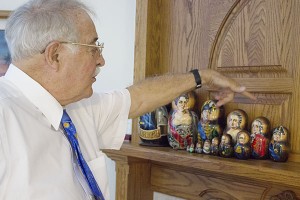 Many Russians were upset that the Germans were given free land, so they began persecuting the Germans. When things went sour, the Osters fled to America after being offered free homestead in North Dakota.

The Osters weren’t used to life in the prairie, and hardships were around every corner, the biggest of which being that their homestead was three miles away from the Native Americans who scalped Lt. Col. George A. Custer.

The story spans five generations, and a second book is currently at the publisher, Ost said. The first book is set in the 1800s and goes to about the 1900s, and the second book spans the 1900s to the 1950s.

Ost’s publisher, Xlibris, is owned by the parent company Author Solutions, which is owned in turn by Penguin Random House. Xlibris is a printing service for those who wish to self-publish a book. He said he was connected to Xlibris through North Dakota State University, where he did some of his research for the book.

The North Dakota State University library houses the Germans from Russia Heritage Collection, and Ost traveled to the library to do some of his research for the book. Ost said he did a lot of research on czars and the history to back up his book.

“Tumbleweeds Burning” is a historical novel, so the historical information is real but the story is fictional.

The book was released in June, and Ost said he has already gotten positive feedback from some readers. He did a book tour in North Dakota from Aug. 7 to 10, and has two book signings lined up in Albert Lea: one at 10:30 a.m. Sept. 14 at Grace Lutheran Church and another at 2 and 7 p.m. Sept. 18 at the Freeborn County Historical Museum.

Ost said his book tells a different story than what would be in the history books because it involves real accounts of people who lived through this part of history. Besides researching in books, Ost said he talked to many people both from Russia and immigrants in the United States to gather information for his book.

The second book in the series is coming out within the next few months, but Ost said he isn’t sure about a third book. He said he had many ideas for what could be in it, but he wasn’t sure if it was going to happen. As for any different projects, there aren’t any on the horizon.