Albert Lea man and wife have raised alpacas for 14 years 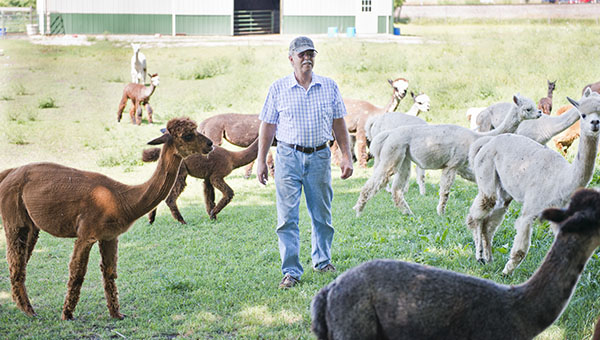 Ed Schlede and his wife, Jean, have a herd of over 70 alpacas on their property. They’ve been raising alpacas since 2000. – Colleen Harrison/Albert Lea Tribune

Home on the farm

Ed Schlede has over 70 pets.

Accompanying his two dogs, Schlede has over 70 alpacas on his 53-acre Albert Lea farm, referred to as the “Alpacas of Oak Knoll Farms.”

Schlede and his wife, Jean, have raised alpacas since 2000, a hobby they picked up after retiring. He said the animals are relatively low-maintenance and are easy to raise. Alpacas don’t need a lot of money put into building or maintaining a facility, according to Schlede. This was a major selling point for him, as a tornado hit his property directly about 30 years ago, wiping out silos, out buildings and everything else on the land except for the house. A pole barn was constructed for the herd as a shelter, but Schlede said that pales in comparison to the cost of other livestock facilities.

The Schledes, married for about 34 years, are members of the National Alpaca Breeders Association. They sell the majority of the wool sheared from their alpacas to the association, which makes products such as socks and scarves out of the wool that the Schledes then sell out of their farm store on their property. They also sell a portion of their wool locally.

Schlede said being members of the co-op makes it easier for them, especially because it means they don’t have to have their own processing plant for the wool fibers.

He said they shear their alpacas once a year in the springtime, and that, pound for pound, alpaca wool is three times warmer than sheep wool, and is also softer and doesn’t itch. Alpaca fiber is hollow and thus has a higher insulation value when spun into yarn.

Alpacas generally live between 20 and 25 years, and the few losses Schlede has had over the years have been due to birthing issues that can’t be helped.

“With raising livestock, you’re always going to have a few losses,” said Schlede.

The couple also profits from breeding their alpacas. The farm has 10 breeding males that are bred with specifically-selected females. Alpacas have a gestation period of about 11 1/2 months. When the infants, or cria, are born a blood sample is taken and sent to the national association, which runs a DNA analysis to verify the mother and father. Schlede said the babies are generally born between 10 a.m. and 2 p.m., something he thinks is biologically ingrained in alpacas from their origins. Alpacas are originally from mountainous regions in South America, and with mountain temperatures significantly dropping at night Schlede believes they adapted over time to birthing during the day. He said the alpacas generally endure cold weather extremely well, and that it’s the hot and humid weather that they tend to seek shelter from more often. The pole barn is always open to them as a source of shade.

The alpacas of Oak Knoll Farms are vaccinated once a month against the meningeal worm, which is largely carried by the deer population and attacks the nervous system. They’re also given what Schlede calls a 3-way vaccine against other diseases once a year.

The alpacas’ toenails and teeth are routinely trimmed as well if they’re not worn down naturally. Alpacas only have a bottom row of teeth, and those teeth continually grow throughout their lifetime.

Schlede’s alpacas are fed grass and hay during the cooler seasons, and are put out to pasture to graze during the warmer months. They’re also fed supplemental pellets year-round for extra nourishment.

Schlede said that alpacas need less room than other livestock. Comparatively, he said that one acre of pasture could sustain one horse, two cows, six sheep or 10 to 12 alpacas.

The only predators domesticated alpacas have are coyotes that can sometimes go after the young, and Schlede said that, while he knows there are coyotes in the area, he’s never had problems with them. He does have a Hungarian sheep dog that he initially got to stay with the herd, but the dog has since become more of an indoor dog due to the lack of threats towards the alpacas. He said he tends to keep dogs away from the alpacas, because if the alpacas are chased, even in a playful manner, they’ll become stressed and run until they drop.

The alpacas are very gentle, and their only natural defenses are running or spitting. Schlede said the alpacas generally spit when trying to fend others away from their food, and tend not to spit at people like their relatives, llamas and camels, sometimes do.

“I have been caught in the crossfire though a time or two,” Schlede said with a chuckle.

Oak Knoll Farms has an open house each year during the last weekend in September where people can see the alpacas up close and feed them. Schlede said they started having the open house a few years back, before teaming up with five or six other local farms in having their events the same weekend. When the national association heard about the weekend’s success, they started National Alpaca Farm Days. Schlede routinely expects between 500 and 600 people for the open house, which also kicks off the selling season for their farm store, which is located on the same property at 1650 Hammer Road in Albert Lea. Their website, warm-feet.com, lists the different products sold in their store.

Schlede, who will be 70 in September, said he plans to raise alpacas for as long as possible. The possibility of cutting back may be sooner than expected though, as Jean was diagnosed with lung cancer last spring in 2013, after losing a daughter to cancer as well. The couple has traveled the world together, from Hong Kong to Spain and Mexico. Schlede said he hopes to go to Peru eventually, to see alpacas in their natural habitat.

Livelihood: Worked as a supervisor at Ventura Foods for 32 years; owner of Oak Knoll Farms

Interesting fact: Schlede and his wife have traveled to places all over the world, including Hong Kong, Spain and Mexico, and hope to someday go to Peru. 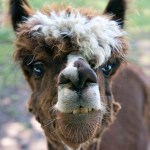 According to Ed Schlede, alpacas only have a bottom row of teeth, and their teeth continually grow throughout their lifetime. If they don’t wear down their teeth naturally, Schlede trims them back. – Colleen Harrison/Albert Lea Tribune 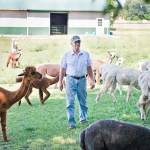 Ed Schlede and his wife, Jean, have a herd of over 70 alpacas on their property. They’ve been raising alpacas since 2000. – Colleen Harrison/Albert Lea Tribune 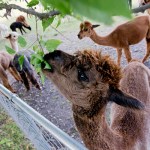 The Schledes’ herd of alpacas, “The Alpacas of Oak Knoll Farms,” eat pasture grass during the warmer seasons, and hay during the cooler ones. They’re also fed supplement pellets througout the year for added nutrients. – Colleen Harrison/Albert Lea Tribune 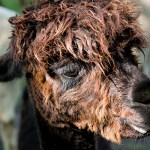 The majority of the alpacas at Oak Knoll Farms are female. Schlede said he has 10 males that are used for breeding, along with a few younger males that were born this season. – Colleen Harrison/Albert Lea Tribune 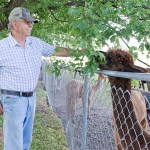 Schlede lowers a tree branch for one of his alpacas to eat off of. Schlede said he’ll drop excess tree trimmings in the pasture when he prunes for the alpacas to eat. – Colleen Harrison/Albert Lea Tribune 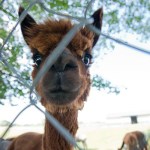 Schlede said alpaca wool is three times warmer than sheep’s wool, is softer and doesn’t itch. The Schledes sell their alpacas’ wool from both their farm store and through the National Alpaca Breeders Association. – Colleen Harrison/Albert Lea Tribune 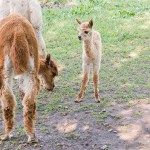 Alpacas have a gestation period of about 11 1/2 months, and their infants are called cria. The youngest alpacas on the farm are about 2 weeks old, like the one pictured. – Colleen Harrison/Albert Lea Tribune 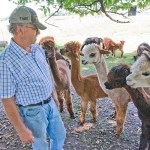 Schlede has about 53 acres of land that his herd of over 70 alpacas occupy in Albert Lea. – Colleen Harrison/Albert Lea Tribune 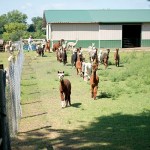 All Schlede has to do is yell out “Girls!” and his herd of over 70 alpacas comes running. – Colleen Harrison/Albert Lea Tribune 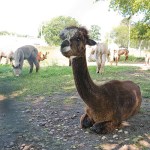 Alpacas are originally from South America and are related to camels and llamas. According to Schlede, they have three stomachs. – Colleen Harrison/Albert Lea Tribune 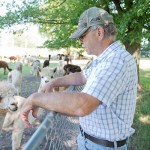 The Alpacas of Oak Knoll Farms have an openhouse each year around the last weekend of September where visitors can see and feed the alpacas and visit the farm store. – Colleen Harrison/Albert Lea Tribune

Cars to be shown during Wind Down Wednesday Representatives from electric car company Tesla Motors will travel down to Albert... read more