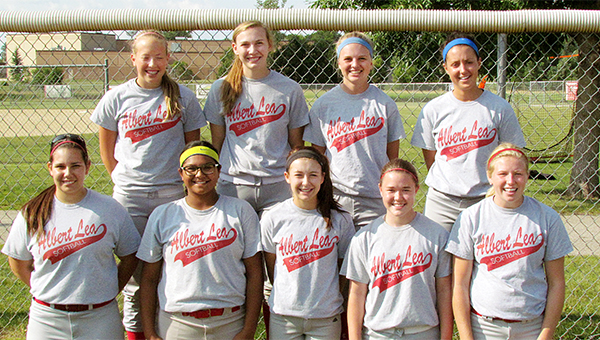 Albert Lea won the Southern Minny U18 League with a record of 14-2 by splitting a doubleheader Tuesday at Stewartville. Front row from left are Veronica Silva, Eesa Lopez, Haley Harms, Dayna Edwards and Taylor Thompson. Back row from left are Allison Grandstrand, Kassi Hardies, Hanna Schilling and Megan Kortan. — Provided

Success from the spring flowed into the summer for the Albert Lea U18 softball team.

Last spring, the Albert Lea varsity softball team amassed an 11-13 overall record, which was four more wins than the previous year. Breaking double digits in the win column hadn’t happened for at least 14 years, according to head coach Dan Harms.

That momentum didn’t stop this summer. Albert Lea gained even more steam by winning the eight-team Southern Minny U18 League with a record of 14-2.

Albert Lea finished the season Tuesday by splitting a doubleheader at Stewartville. Albert Lea fell 7-1 in Game 1 but rallied from a two-run deficit in Game 2 to win 5-2.

“Just like us, they pretty much had their varsity team playing,” he said.

The first time the two teams met was in the season-opener on June 3. Albert Lea earned a home sweep with a pair of one-run wins, 4-3 and 2-1.

In Game 2, Stewartville took a 2-0 lead in the fourth after three scoreless innings. However, the floodgates opened for Albert Lea in the sixth as it scored five runs to take a lead it never relinquished.

The first four innings were rough, coach Harms said. Up until the sixth, Albert Lea either went down in order or only had four hitters take the batter’s box in each inning.

That pattern changed when Albert Lea loaded the bases with three consecutive bunt base hits. With Megan Kortan on third, Harms on second and Taylor Thompson on first, Albert Lea scored its first run of the game on a grounder by Hardies. Veronica Silva followed with a hit to the third baseman, who overthrew first base and allowed Harms and Thompson to score. Hanna Schilling hit a bullet up the middle to drive in Silva and Allison Grandstrand and round out the scoring.

Along with her 2-RBI single, Schilling earned the win in the pitching circle.

She pitched seven innings, faced 26 batters, struck out three batters and allowed four hits, an earned run and a walk.

“Her control has improved a lot over the last two years,” coach Harms said. “It’s been a dramatic change. For the most part, she’s in the one-to-three walks range.”

On the season, Harms led the way from the pitching circle with a 7-1 record, while Schilling was 5-1.

Albert Lea was 12-2 in game action with two forfeits by Winona Blue, a club from Winona Cotter, that couldn’t field a team after the doubleheader was postponed.