Albert Lea teacher tries a little Turkey on the side 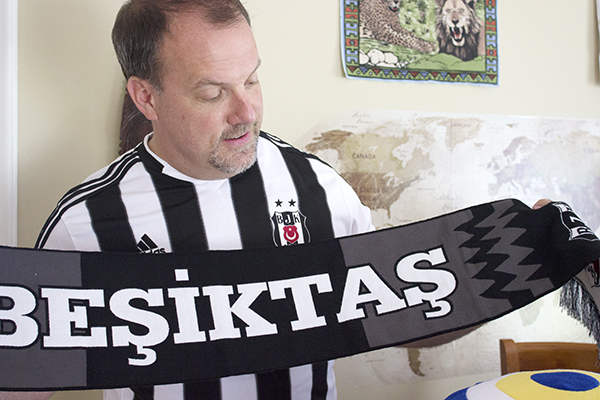 Jerry Bizjak holds a scarf from the Turkish soccer club, Besiktas Jimnastik Kulübü, and wears the club’s jersey. Bizjak said many Turkish people came up and commented on his jersey despite the language barrier. – Hannah Dillon/Albert Lea Tribune

Two weeks, 2,000 miles and countless sights to see: that was the life of Jerry Bizjak earlier in July when he got the chance to travel to Turkey.

Bizjak, a social studies teacher at Albert Lea High School, went to Turkey from July 14 to 27 on an educational trip sponsored by the Turkish Cultural Foundation. 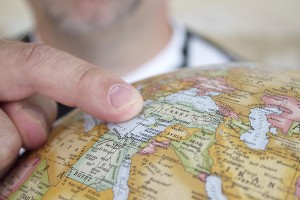 Jerry Bizjak points to the country of Turkey on a globe in his home, a country where he spent two weeks and traveled over 2,000 miles last month. – Hannah Dillon/Albert Lea Tribune

After getting an email message at work and attending a seminar, Bizjak said he was accepted into the program.

During the two-week trip, Bizjak and the other educators went from Istanbul to Ankara, a trip that normally is about 220 miles, but with seven stops touring the country was more than 2,000 miles.

There were 25 educators on the trip, Bizjak said, five of which were from Minnesota. The other educators were from Montana, Nevada, Missouri and Colorado.

Starting in Istanbul, Bizjak said the city was “stunning” and said it was a “unique city in every respect possible.”

The group had the chance to see many historical sites, including the Hagia Sophia Museum, the city of Troy and a neolithic site that is over 9,500 years old.

One of the sites Bizjak specifically brought up was Pamukkale, a hot spring that he compared to Yellowstone National Park in Wyoming. It looks like there is snow around Pamukkale, but it’s actually calcium deposits.

Bizjak said it was a “one-of-a-kind site.” 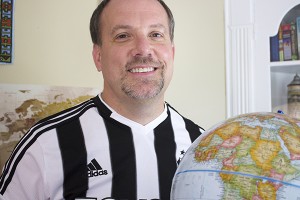 After spending two weeks in Turkey, Albert Lea social studies teacher Jerry Bizjak has a new understanding of the country that he can bring into his classroom. – Hannah Dillon/Albert Lea Tribune

He also compared a historical region called Cappadocia to the Grand Canyon, which he said he had the chance to take a sunrise hot air balloon ride over.

Bizjak had the chance to visit Gallipoli, which is best known for the Gallipoli Campaign in World War I.

One thing Bizjak found interesting was the permeation of Mustafa Kemal Ataturk, the founder of modern Turkey. Bizjak said a picture of Ataturk and a copy of a speech he made was in every classroom.

Besides having a good time seeing the historical sites of Turkey, Bizjak said he has a lot of material he can bring to his classroom.

But Bizjak did have one connection to Turkey before heading there in July: Ben Woodside, an Albert Lea High School graduate, currently plays basketball for TED Ankara Kolejliler, Ankara’s basketball team. Bizjak said Woodside’s parents are his neighbors.

Because he believes traveling to other countries promotes global awareness, Bizjak has organized a trip to take students from Rome to Athens next June.