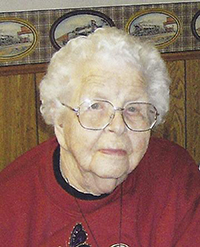 Anna Booth was born July 1, 1912, at the farm of her parents, Ed and Karen Bustad, who emigrated from Norway to Taopi. Anna was the eleventh of 11 children. She was baptized and confirmed at Marshall Lutheran Church and a member of the Church of Christ in Austin.

Anna was married to Glenn Booth in September of 1931. She was a farmer’s wife for 25 years, after which she and Glenn worked as caretakers for Mrs. Hardenberg at White Bear Lake until they retired. It was there that Anna gained fame for her outstanding cooking and Glenn for his bountiful garden. In 1986 they moved to Austin where Anna and Glenn began to raise raspberries for market and also became beekeepers. They built up the business to be large enough to supply the needs of local supermarkets, farmers market and other outlets. Anna bottled the honey and for several years she won blue ribbons for her honey at the Mower County Fair. This was a great source of pride for her since she was in her eighties. Even after Glenn passed away in 1995 at 82, Anna kept up the business working long days and selling the honey and raspberries, as well as homemade jam. She continued the business, on her own, until 2005, at 93.

Anna liked to stay busy. She was an avid reader and she was a skilled quilter. Never one to rest, she continued to make quilts for her children, grandchildren and even great-grandchildren until her final years. Anna will always be remembered as being a no-nonsense yet caring, hard working person.

Funeral Services will be at 11 a.m. Wednesday at Clasen-Jordan Mortuary with the Rev. Jeremy Johnson officiating. Interment will be at Oakwood Cemetery. Visitation will be from 10 a.m. until the time of the service on Wednesday.