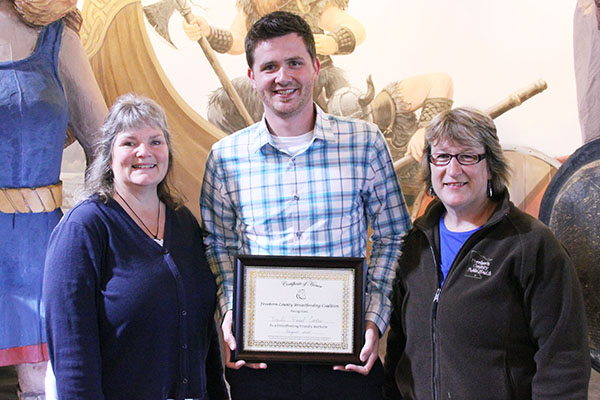 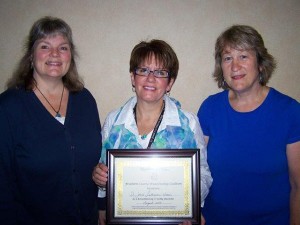 Cheryl Lonning, a public health nurse, said the coalition chooses which businesses to honor based off of feedback it hears from the community.

“It’s nice to have a variety,” she said.

Dustin Trail, manager at Trail’s Travel Center, said his business is always looking for ways to improve the quality of life for its employees and has set aside a room in the administrative area of the truck stop where women can pump or breastfeed.

“It’s something that’s very simple to do,” Trail said, noting that recently there were four or five women employees who were pregnant.

Cindy Gaudian, public health nurse and lactation specialist, said employers are required to find a place other than a bathroom for women to use as needed.

The American Academy of Pediatrics and the World Health Organization recommend at least one year of breastfeeding for infants.

In Minnesota, though most mothers express a desire to breastfeed, only 78 percent start to do so, and only 16 percent are exclusively breastfeeding six months later.

Lonning said there are many benefits to breastfeeding for both babies and mothers. Babies who are breastfed tend to be healthier, have less ear infections and less problems with asthma and obesity.

“That milk is taylor-made for the babies,” Lonning said.

Mothers who breastfeed their babies tend to have an easier time getting back to their pre-pregnancy weight and have less instances of ovarian and breast cancers and diabetes.

She said though breastfeeding can sometimes be challenging — especially for first-time mothers, there are many resources in the community to help. There are resources through Mayo Clinic Health System in Albert Lea, Freeborn County Public Health, the Women, Infants and Children program and through phone hotlines.