AUSTIN — It was the end of a journey for the Austin ArtWorks Center Thursday night.

With the snip of a ribbon, the Austin Commission of the Arts was finally able to officially open its new ArtWorks Center on Thursday.

“I’m still wowed whenever I go in,” Executive Director for the Austin Commission of the Arts Jennie Knoebel said. “We’ve put a lot of work in getting it ready and making it happen, and it’s exciting to see it come together.” 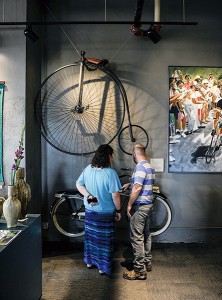 Chuck and Kim Waletzke look at some bikes on display at the Austin ArtWorks Center Thursday night during the center’s grand opening. – Eric Johnson/Albert Lea Tribune

The center, at 300 N. Main St., or the old bank building, featured several artists during the grand opening, including John Sullivan, who showed off the clay studio in the basement, and Wendy Heimsness, who painted on the second floor. There was also live music by the Austin Symphony String Quartet, and a private party for volunteers was held earlier on Thursday.

“We wanted to have this be a celebration of the arts for the entire week,” Knoebel said.

“It just makes me a little more confident in myself,” Pipkorn said.

She has been drawing and painting since she was young, and has always loved it. She focuses on landscapes and portraits, of both people and pets.

“I dabble in everything, basically,” Pipkorn said. “My style is colorful and bold, kind of like me. I just like to be fun.”

Pipkorn said her work has been categorized as impressionism and surrealism. She was involved in the ArtWorks Festival last year and will be featured this year at the ArtWorks Center.

Three artists’ work will be showcased at the center through October, including Zane York, Joseph Sand and Angie Pipkorn.

Zane York was also excited to be showcased at the center this year.

“It’s an honor to be featured here,” York said. “It’s such a huge cultural institution, how could I not be honored?”

York is an oil painter, and currently focuses on insects. He is a representational painter. York lived in Austin for about nine years and moved to several different areas. He has lived in Brooklyn, N.Y., for about 14 years, and works at an art gallery in New York, as well as painting.

York got involved in the ArtWorks Festival through his former art teacher, Bruce Loeschen. After submitting some works to an art show, his teacher convinced him to submit works to the festival.

York was involved in the first festival, but couldn’t make it to the second. His work will be featured in the ArtWorks Center this year.

Both artists were excited about being featured at the new center.

The old bank building, which has been vacant since 1997, was a nice fit to become the new ArtWorks Center.

“(It has) beautiful architecture and the space laid out nicely for what we wanted to do, so it was a good fit,” Knoebel said. “We wanted a more visible location.”

Organizers hope the new location will gain more visibility not only for the center, but for visual arts as a whole. The hope is the center will be a place that community members want to go and check out what is going on with the arts in Austin.

“We’re hoping it’ll be a nice community-shared center where everyone will feel welcome,” Knoebel said.

The center will feature a variety of classes which will be open to the community, including clay, sculpting, pottery, woodcarving, drawing, painting, and even knitting and writing.

“Pretty much a great variety of art,” Knoebel said.

Memberships are also available for the center, which give benefits and discounts for classes. Besides classes, the ArtWorks Center will be available to rent for private events. The gallery spaces and retail shop will also remain open during the regular business hours of Tuesday through Saturday from 10 a.m. to 5 p.m.

The previous art center, Austin Area Artworks, was located at the Oak Park Mall, and in January that organization merged with the Austin Area Commission of the Arts to create the new ArtWorks Center. The new center also fills a need for Vision 2020. One of their goals was to fill the space, and the new center does just that.

“(It’s) a great partnership between the Austin Commission of the Arts the and Vision 2020,” Knoebel said.

Although the center is officially open, it hasn’t quite reached the $600,000 goal yet.