Austin is ready to rev its artistic engine 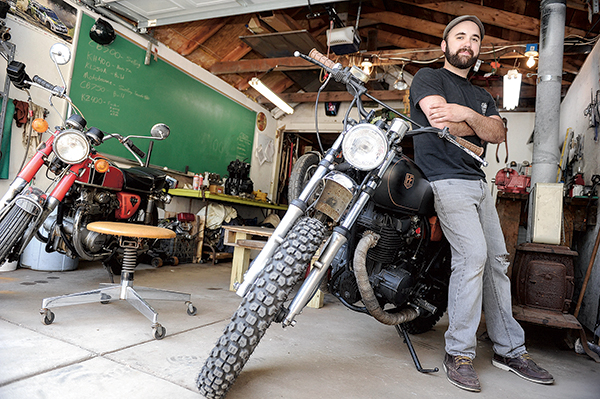 Andrew Hull is once again putting motorcycles on display, following up his Build Bike Art Show earlier this year with the Spare Arts Show this weekend during the Austin ArtWorks Festival. – Tribune file photo

AUSTIN — Andy Hull can’t fit a car in his garage because it’s filled with a workbench, a full-size chalkboard, a neat row of disembodied tires, and of course, his 10 motorcycles.

Many of his bikes are in pieces as Hull has started to work to customize them. Other parts are stored here and there.

The garage is representative of Hull’s passion for motorcycles — especially for rebuilding motorcycles. Hull and Austin ArtWorks Festival organizers are looking to help people share that passion this month. After a successful, small-scale bike show fundraiser in March, organizers are bringing back the Spare Arts Bike Show during ArtWorks on Saturday from 10 a.m. to 6 p.m. on a larger scale. 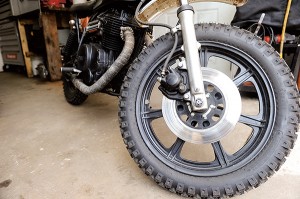 One of Andy Hull’s motorcycles sits in his garage in his Austin home. – Tribune file photo

The ArtWorks Festival Spare Arts show will be a different animal. It will transition from inside the ArtWorks Center with limited space to a much larger outdoor venue. Volunteers will block off Main Street from Second Avenue to Fourth Avenue — Steve’s Pizza down to the ArtWorks Center.

The motorcycle show will be similar to a car show, with an artistic bend. The show will be open to all motorcycles — custom, stock and vintage. Hull also invited people to bring motorized scooters.

“It’s really comparable to a car show, but we’re going to try to put a little different spin on it,” Hull said. “It’s got a lot of potential.”

Hull, an Austin native who works at Hull Painting with his father, started to work on bikes at an early age. The first motorized vehicle Hull ever had was a 1984 Tomos pedal-start moped. He started working on it to keep up with his friend’s newer, faster models.

“It kind of spun off into bigger motorcycles,” he said.

Hull continues to rebuild his own bikes, mainly Japanese models like Hondas, Yamahas and Kawasakis, though he’s looking for British motorcycles.

“It’s a bit of an obsession,” Hull said, adding with a laugh that he could be considered a bike hoarder.

Customization gives many riders a chance to ride brag-worthy bikes without breaking the bank.

“You don’t have to have a ton of money to build a bike,” Hull said.

Hull rarely buys a new motorcycle. To Hull, customization brings a new sensibility to bikes, like one he bought that was ridden by farm kids and left for the junkyard.

“I bought it for $300 and now it’s a completely different bike,” he said. “It brought new life into it.”

To Hull, a stock motorcycle is like a canvas and customizing the bike is like a painter taking the brush to a surface, ready to explore the work’s potential.

Last year, Hull finished a 1979 Yamaha XS400 he built to resemble Steve McQueen’s Triumph from “The Great Escape.” Though it turned out better than he expected, the engine blew after he rode it throughout much of last summer, so he worked on rebuilding the engine over the winter and spring. He expects to take it to the show in August.

He changed the suspension, shortened the frame and gave it a more offroad stance. He also customized the tank and painted the frame.

“It doesn’t have a whole lot of stock parts on it,” Hull said.

When working on his bikes, Hull flies by the seat of his pants. Many people sketch out plans and make precise blueprints and measurements, but Hull works more through trial and error and by feel, partially because he can’t draw the blueprints.

He compares his approach to sculpting.

“I just like the human feel of something built the way I do it,” he said. “I just like seeing something that’s kind of been sculpted and it’s got little imperfections here and there.”

When he finished the build after about two years, he even surprised himself.

People have asked Hull to build them bikes, but he plans to just keep it as his own hobby.

To people like Hull, even stock motorcycles are a form of art. He also owns a stock 1971 CD350 Honda.

Hull isn’t alone as more people of all backgrounds customize motorcycles. Hull has seen a recent boom for motorcycles as a cheaper form of transportation.

“The whole culture has changed a lot,” Hull said. “It’s not so focused on if you have a Harley Davidson or you ride a Honda or a sport bike or a cruiser of some sort. It’s very open.”

Tinkering with a motorcycle, to Hull, is more accessible than working on a car or hot rod.

After Hull attended an invite-only motorcycle show in Milwaukee, he was impressed with the fun community feel. He ran his idea for a bike show as a fundraiser for the ArtWorks Center past Austin Area Commission for the Arts, and she urged him to make it happen — sooner than he’d planned, back in March.

Though the show only came together in about three weeks, dozens of people turned out to check out the bikes.

“The show turned out to just be a blast,” Hull said.

With Spare Arts returning, Hull hopes it could be a way to boost downtown Austin during the festival, as Hull plans to work with some businesses to offer specials as the bike show will draw people from the Austin Utilities plant downtown.

Unlike the Milwaukee show, Spare Arts will be open to anyone.

“Anybody who wants to bring their bikes can come,” he said.

With an outdoor show, they’re at the mercy of the weather, so it’ll be rain or shine.

No pre-registration is required, but Hull asked people showing their bikes arrive about an hour before the show.