BRICELYN — A 25-year-old Bricelyn man was injured Wednesday night after another man reportedly slashed him with a knife in this community. 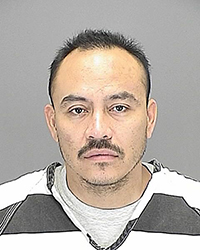 Authorities are looking for Roel Gallardo, 38, of Bricelyn, who is believed to be the suspect in the case, according to a news release from the Faribault County Sheriff’s Office. He had not yet been found as of this morning.

The release states authorities do not believe the public is in danger and notes the slashing appears to be an isolated incident between the two men.

Deputies were called to Fourth Street and Main Street in Bricelyn at 7:10 p.m. Wednesday after receiving a report of an assault. When they arrived, they found 25-year-old Guillermo Lopez Jr. of Bricelyn had been assaulted with a knife.

Lopez was treated by the Bricelyn Fire Department and Ambulance and was transported to the United Hospital in Blue Earth with injuries that were not life-threatening.