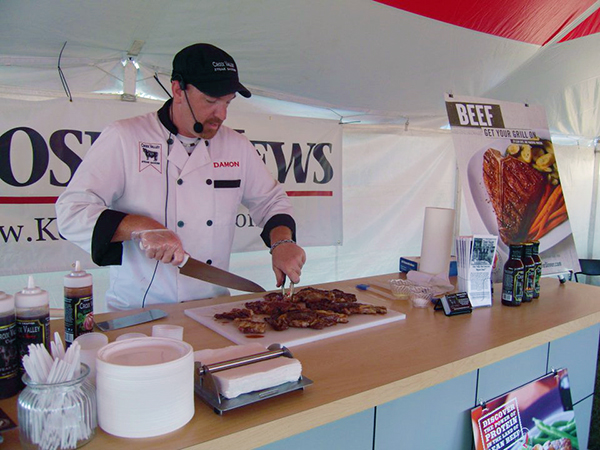 Damon Holter of Wisconsin joins over 50 teams of cooks from five states at the Big Island Bar-B-Que this weekend. – Provided

A slew of new features are shaking up the seventh annual Big Island Bar-B-Que, from new contests to becoming a qualifier for the World Food Championships in Las Vegas.

The Big Island Bar-B-Que — which is from 5 to 11 p.m. Friday and from 11 a.m. to 5 p.m. Saturday at the Freeborn County Fairgrounds — is a Kansas City Barbeque Society sanctioned state championship, but now the top three winners — in the chili, barbecue and dessert categories — will also get to compete with cooks around the world at the World Food Championships. 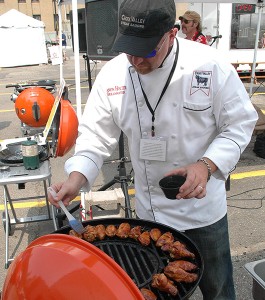 Damon Holter, one of the cooks competing in the Big Island Bar-B-Que, will be on “American Grilled” at 8 p.m. tonight on the Travel Channel. – Provided

The Big Island Bar-B-Que might not attract cooks from around the world to their event, but there are over 50 teams from five states slated to compete for $10,000 in prize money. There are 16 teams on the roster for the chili competition.

One of the cooks that will compete in the barbecue is Damon Holter of Wisconsin. Holter, owner of Croix Valley Foods, will be in an episode of “American Grilled,” which airs at 8 p.m. today on the Travel Channel.

There will also be a rib eating contest at 4 p.m. Saturday as well as an amateur backyard barbecue contest for those just starting out with barbecue. Perry Vining, Big Island Bar-B-Que coordinator, said the amateur competition isn’t for money, but the winner does get a trophy and bragging rights.

The trophies this year are being made by Jack Burns, a local artist who makes mugs and furniture out of wood. The trophies themselves will be some of Burns’s mugs, and the overall winner will receive a 64-ounce tankard with two handles.

One new thing this year that will be the most noticeable to visitors of the Big Island Bar-B-Que is this year’s entertainment. Vining partnered with Merle Krause of The Lighthouse Theatre & Event Center to bring two bigger acts to the festivities.

One of these acts, Dave Lambert, who is from Albert Lea, will be performing at the barbecue with his band, Dave Lambert and the Motivators.

The second is Annie Mack, a blues artist who represented Minnesota in the International Blues Challenge this January.

The entertainment at the Big Island Bar-B-Que is free. To taste the chili on Friday night, a voter’s packet is $4, $5 with a bottle of water. Voters get a spoon to taste each chili — and there will be a lot of food. Vining expects there to be at least 100 gallons of chili for tasting.

There will also be barbecue vendors selling food at the event such as the Rib Rack, Piggy Blues and the Smokin’ Bros.

For information about signing up for the amateur backyard barbecue contest or the Kid’s Que, call Perry Vining at 507-373-3938.