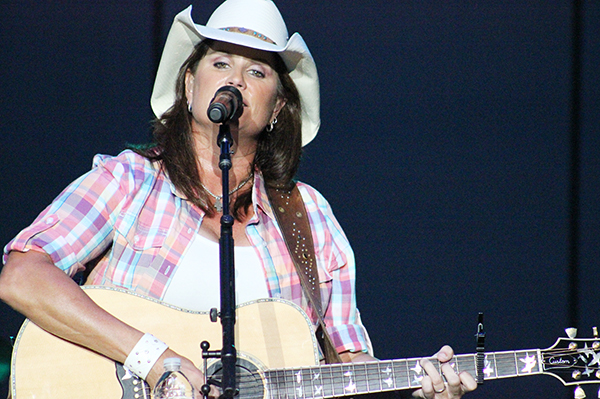 “It’s so good to be up here,” Clark said. “What a beautiful night we have.”

Hailing from Medicine Hat, Alberta, Clark began her show singing “I Just Wanna Be Mad” and “Girls Lie Too.”

As the only female musician at the Grandstand this week, Clark, 45, joked she was bringing “bra country.”

She encouraged members of the crowd to go after their dreams and talked about moving to Nashville from Medicine Hat and eventually becoming a member of the Grand Ole Opry, the only Canadian woman with the honor.

“You have to go after it with no fear,” she said, before performing “No Fear,” which she co-wrote with Mary Chapin Carpenter.

Clark said this was her 19th summer on the road since starting her career in the mid-1990s, and she thanked the crowd for coming out to listen to her.

“Thank you for filling this place up tonight,” she said.

She performed her new single “Some Songs,” from the album with the same name, which is set to be released Sept. 2. The song is already in the top 30 in Canada, she said.

She took concertgoers down memory lane singing “Emotional Girl,” “If I were You,” “Dirty Girl” and others.

By the end of the night, she had performed more than 18 songs, before exiting the stage to a standing ovation and then coming back out to perform at least two more.

Encouraging the crowd to clap and sing at several points along the way, Clark threw out guitar picks and even her own hat into the audience.

Clark is an eight-time Canadian Country Music Awards Entertainer of the Year and the winner of the Female Vocalist of the Year in Canada five times.

She has sold over 5 million albums and achieved Gold, Platinum, Double Platinum and Triple Platinum status.

Clark said earlier in the day she could have been seen golfing at Wedgewood Cove Golf Club, where she joked she lost an estimated 20 balls. 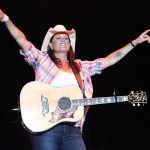 Country music singer Terri Clark encourages the crowd to sing along during her concert Saturday night at the Grandstand at the Freeborn County Fair. – Sarah Stultz/Albert Lea Tribune 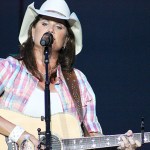 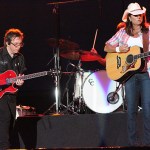 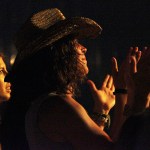 Fans clap during the Terri Clark Saturday in the Grandstand of the Freeborn County Fair. – Sarah Stultz/Albert Lea Tribune 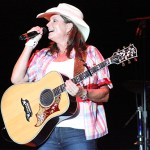 Terri Clark smiles as she sings Saturday during her concert at the Freeborn County Fair. – Sarah Stultz/Albert Lea Tribune 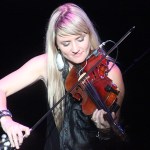