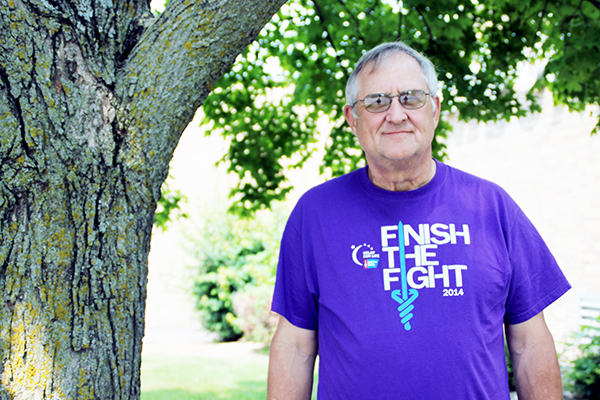 Men get breast cancer, too.

Lynn Berven is an active participant of the Freeborn County Relay for Life. This year, he is one of two honored survivors.

He retired as a mail carrier eight years ago. Once he did that, he sure didn’t slow down. Now, he works part time for Bonnerup Funeral Services and Napa Auto.

He occasionally drives Shriner cars in parades and is an actor. Berven has been in the cast of both “Church Basement Ladies” and “Annie.”

In 2010, he was diagnosed with breast cancer. What his doctor originally thought to be skin cancer, turned out to be the sign of a tumor. Berven went through surgery to have the tumor removed along with 14 lymph nodes, three of which were found to have cancer, six chemotherapy treatments, 33 radiation therapy treatments and was put on a hormone pill.

After surgery, Berven found comfort from his family, including his wife, children and grandchildren while healing.

“I liked that,” Berven said in reference to getting to cuddle with his “grand babies.”

Another thing Berven did after surgery and treatment was cross items off his bucket list, such as singing karoke, being a part of a band and performing in a play.

Berven was asked by the cancer support group at Mayo Clinic Health System in Albert Lea if he could be nominated for the Relay for Life honor.

“They don’t believe they could get it,” Berven said.