Daniel A. DeBoer was born on Oct. 12, 1956, to Paul and Lois DeBoer in Albert Lea. He has three brothers: his older brother Doug and two younger brothers, Duane and Darren. He also has one sister, Darla. He grew up on a farm in Hollandale. On the farm, he helped his father raise hogs and worked in the local cabbage fields. 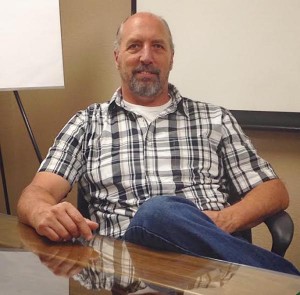 Dan attended Hollandale Christian School from kindergarten through the 8th grade. From there, he attended Albert Lea Senior High from 9th grade through to graduation, which took place in 1974.

Upon graduation, Dan immediately went to work for Wilson Foods in Albert Lea from 1974 to 1979. At that time, he decided to go back to school and learn a trade. He attended Riverland Technical College in Albert Lea and completed a two year program in Transportation and Distribution Management.

This education opened an opportunity for employment with Matson Truck Lines, Albert Lea, which lasted from 1983 until 1989. This was very good training ground for the next venture in his life.

In early 1989, Dan and his wife, Kathy, along with a couple other business associates began their own trucking corporation, called Pro Trucking, Inc. Through their business operations within Pro Trucking, they developed a trusted partnership with one of their customers.

These customers valued the services of Pro Trucking and asked Dan if Pro would consider starting a steel fabrication shop. Through much discussion came the formation of Pro Manufacturing, Inc., a sister corporation, in 1994. Pro began by manufacturing all steel shelter and park pavillons for one of their trusted partners. This led to building bridges, which opened up the opportunity for Pro Manufacturing to build the replacement bridge for Katherine Island in Albert Lea. Pro Manufacturing has since become involved with other industries. One example is the making of fertilizer towers for the farming industry. Because of the unique combination of trucking and manufacturing, Pro has also begun offering linestaking services as well. The third addition to the Pro Companies is Pro Transportation, Inc., a logistics corportation, which complements both the trucking and the manufacturing, which helps Pro as a whole to take their customers from start to finish. All three corporations are still in full force today. Among the three corporations, Pro employs 81 people.

Dan married his wife, Kathy in 1979. They have been blessed with three children. Jace, the oldest child, is now working and heavily involved in the trucking side of Pro. Bryce, the second of the three, is currently attending Bethel University. He is half way to gaining his degree in Business Finance, with the intention of working his way into the manufacturing business. Toni, the youngest and only girl, will be a junior in high school in fall 2014.

Some of the family activities that Dan and his family enjoy are boating, grilling and entertaining, and playing cards and board games together. They have all been involved to some degree in serving on mission trips together. Most of these trips have been to Jamaica.

In addition to his role as a businessman, husband, and father, Dan has served in other capacities within the community and the church. In his earlier years, he served three years as a board member for the Hollandale Christian School. He more recently has served on the elder board at Crossroads Church for six years.

One of his business partners in Pro Trucking became very involved with Accompong, Jamaica, and built a center there. This center became a local ministry focus which Dan has become very involved in. This ministry formed an organization called Jamaica Accompong Connection of Minnesota and functions out of Albert Lea. Dan has been very involved and has chaired this organization for several years. He has also led many mission trips to Accompong to serve the community there. Not only is Accompong blessed through this ministry, but it has brought the church and the community of Albert Lea together in many ways.

Dan is currently serving on the Shellrock Watershed District board.