Memorial services for Daniel John Disher will be at 10:30 a.m. Thursday at St. Theodore’s Catholic Church. The Rev. Timothy Reker and Deacon Mike Ellis will officiate. Military honors will be accorded by local servicemen’s organizations. Visitation will be from 4 to 6 p.m. Wednesday at Bayview/Freeborn Funeral Home and one hour prior to the service at the church. Online condolences are welcome at www.bayviewfuneral.com.

Daniel died at his home. 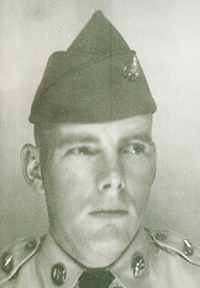 Daniel John Disher was born May 22, 1936, in Geneva, the son of Curtis and Margaret (Kiley) Disher. He grew up in Geneva and graduated from high school in Ellendale.  After graduation, Daniel served his country in the United States Army. After his discharge he worked at the Geneva Store before going to work at Wilson & Co.

In May of 1971, Daniel married Patricia Ann Butler at St. Mary’s Catholic Church in Newry Township. They later divorced. After working at Wilson & Co. for over 35 years, Daniel retired. He was a member of St. Theodore’s Catholic Church, the American Legion and a former member of the Eagle’s. Daniel enjoyed golfing, fishing, pheasant hunting and looking for arrowheads. He was an avid Minnesota Vikings and Twins fan. In his later years he enjoyed coin collecting and going for coffee at McDonald’s.

Daniel was preceded in death by his parents.