Funeral services for Donna May Johnson, 90, of Albert Lea will be at 10:30 a.m. Tuesday at Salem Lutheran Church in Albert Lea. The Rev. Matt Griggs will officiate. Interment will be at Hillcrest Cemetery. Visitation will be held from 4 to 6 p.m. Monday at Bayview/Freeborn Funeral Home and one hour prior to the service at the church. Online condolences are welcome at www.bayviewfuneral.com. 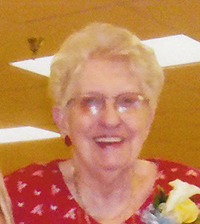 Donna May Johnson was born May 14, 1924, in Albert Lea, the daughter of Ole and Ingaborg Sophia “Emma” (Martinson) Helland. Donna grew up and attended school in Albert Lea. On May 3, 1942 Donna was united in marriage to Harry Johnson in Emmons. Donna worked as a nursing assistant and in housekeeping at the Good Samaritan Society in Albert Lea. She was a member of Salem Lutheran Church where she was active in altar guild and Sew and Tell quilting group. Donna enjoyed crafts, quilting, knitting and rug-making. She enjoyed being a caregiver and taking care of her family.

Memorials are preferred to the Heart Fund, Salem Church or Humane Society.