Doryce Helen (Kabrud) Thompson passed away peacefully at St. John’s Lutheran Community on May 9, 2014, with her son and daughter present. 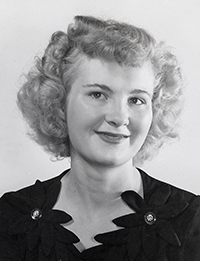 She was born at home in Albert Lea to Hannah (Granum) and Ernest E. Kabrud on Aug. 6, 1922. She attended grade school in Glenville and high school in Albert Lea, graduating in 1942.

She was a lifelong member of the Methodist Church, first in Glenville, and then in Albert Lea; she was also a member of circle at church. It’s true she was confirmed at First Lutheran Church of Albert Lea — her dad was Lutheran, but her mom was Methodist, so she was too.

Dorie worked as a bookkeeper for many years, first for Brown-Quinlivan Construction and then for Queen Products in Albert Lea.

She was a lover of animals — most especially dogs — and volunteered at the local Humane Society. 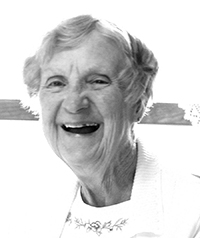 Dorie and Bill always had a lovely garden, lush with flowers and vegetables. She was a great cook and baker; her chocolate chip cookies were the best.

After they retired, they spent 21 winters in Lake Havasu City, Ariz., where Bill’s sister, Dorothy, had moved years earlier.

Dorie was a tireless volunteer; she was a member of the American Legion Auxiliary, the Shriners, the Naeve Hospital Auxiliary and she volunteered at Senior Dining.

She made many trips to Juneau, Alaska, to visit her daughter, Carola, husband, Larry Spencer, and her two grandchildren, Logan and Sophie Spencer.

Family was everything to her, and she is survived by her son, Bill Jr. and wife, Kay, of Minnetonka and daughter, Carola Thompson, of Juneau. Carola’s husband, Larry Spencer, passed away much too soon last September. Also surviving are grandchildren Erik Zeleznikar (Kara Ferguson) of Minneapolis, Dr. E. Sophie Spencer (and husband, Dr. Mo Ashraf) of Chapel Hill, N.C., and Logan Spencer of Washington, D.C. She is also survived by sister, Joan Becker, and brother, Ernie Kabrud, and wife, Laurine, all of Albert Lea; as well as many nieces and nephews.

A memorial service will be at 11 a.m. Friday at the Bonnerup Funeral Chapel. The Rev. Tom Biatek will officiate. Interment will be at Graceland Cemetery.