The congressman for the 4th District of Iowa does more to harm the Republican Party than to help it.

At a time when GOP leaders hope to appeal to a wider array of people, such as Hispanics and blacks, Rep. Steve King continues to send middle-of-the-road voters to the Democratic side. 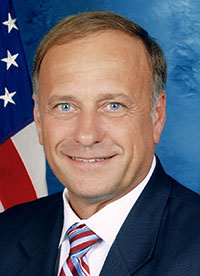 While Ferguson, Mo., was the center of America’s debate over police mistreating minorities, King earlier this month implied there was no racial profiling going on because the protesters were all of the same “continental origin.” He also said protesters should “straighten up and fly right.”

Agree or disagree with his points, the statement remains — without any doubt — racially charged. Victim blaming is not a good idea during volatile times. And while King is not a leader in his party and holds little true power, he nevertheless represents a real disconnect from reality that harms the more moderate, reasonable, fiscal-minded side of the Republican Party. King’s comment does nothing to invite minorities to the GOP and patently embarrasses Iowans.

This week, he writes in an article in National Review Online that police must honor Immigration and Customs Enforcement detainer requests, which ask to hold foreign-born inmates who have committed crimes so ICE can check their immigration status. Many law enforcement agencies are reluctant also to act as immigration agencies, the requests are just requests and a court ruling in April said law enforcement agencies lack the probable cause to hold a person based on being foreign-born or on a mere federal request.

Again, agree or disagree with King’s point, the fact that he is pushing the matter sends a second message that his party is unfriendly to foreign-born people — which conclusively turns away the Hispanic vote.

Presidential elections in America in the 21st century require support from minorities.

When King sticks his foot in his mouth, other Republicans wish he would leave it there so it would block him from doing it yet again. There is a midterm election this year and presidential one in two years, and the Republicans desire to garner minority votes in both elections. Does King forget the national constituency his party woos or does he only consider his rural red corner of Iowa?