Funeral services for Edmund (Ed) Brandt will be at 10:30 a.m. Thursday at Trinity Lutheran Church. The Rev. Curtis Zieske will officiate. Burial will be at Hillcrest Cemetery with military honors accorded by the American Legion and VFW Honor Guard. Visitation will be from 5 to 7 p.m. Wednesday at Bayview/Freeborn Funeral Home and one hour prior to the services at the church. Online condolences are welcome at www.bayviewfuneral.com. 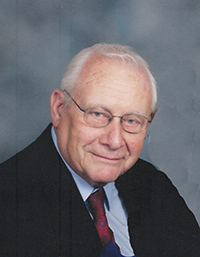 Edmund E. Brandt was born April 23, 1927, in Hayward, the son of Ferdinand and Emma (Beuthein) Brandt. Ed attended school in Freeborn and later served his country in the U.S. Army. He enlisted in 1946 and took his basic training at Fort Lewis, Wash. He then was shipped to the Philippines and then to the Palawan Islands. He was discharged on June 1, 1947.

On Oct. 26, 1947, he was united in marriage to Alberta Fuchs in Austin. The couple lived in Austin, Wells and Albert Lea. Ed worked for Streater for 33 years as an installation supervisor, woodshop supervisor and then as the quality control manager. Ed and Alberta enjoyed traveling all over the United States and Hawaii. He enjoyed bowling, golfing and watching all sports. He was a big fan of the Minnesota Twins and Vikings. He also enjoyed playing cribbage and having coffee with his friends. Ed was a member of Trinity Lutheran Church, the American Legion, Elks and Moose Lodge.