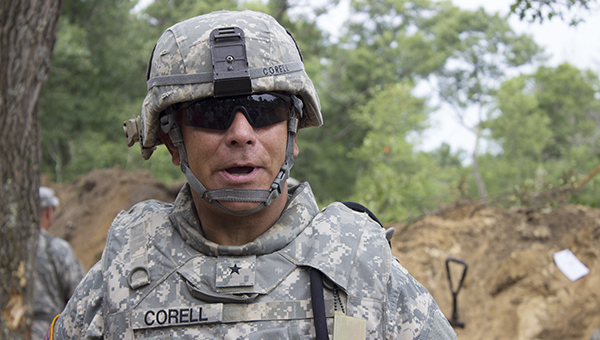 Brig. Gen. Benjamin Corell talks to the employers visiting with ESGR and asks their opinion of his troops, all of which were positive remarks. Hannah Dillon/Albert Lea Tribune

Meet your employees’  other boss

Editor’s note: This is the first of a two-part series on the Albert Lea National Guard unit training in Wisconsin.

FORT MCCOY, Wis. — It was a calm before the storm. Soldiers were waiting behind a berm, waiting for their third defensive training exercise to begin in 24 hours.

Things were a little different that day, though, as a group of civilian employers observed the soldiers’ training.

However, the most shocking part of the training wasn’t the surprise attack of the defensive training or the civilians: it was the appearance of a general.

“Relax,” Brig. Gen. Benjamin Corell said, but the military personnel around him still stood alert and the employers were amazed — no one was expecting to see such a high-ranking official.

These employers from Wabasha and Rochester got a chance to see training exercises at Fort McCoy through the Employer Support of the Guard and Reserve’s employer day.

It gave them a chance to see what the Minnesota National Guard and Army Reserve does during training and combat.

The ESGR Employer Day spanned Aug. 7 and 8 at Fort McCoy, situated between Sparta and Tomah in Wisconsin.

Members of the Guard and Reserve spend two weeks at Fort McCoy, a 60,000-acre military installation training nearly nonstop. This is a yearly process for these service members.

Six employers were lead by Chris Christopherson of Wabasha and Dale Ericson of Gibbon, both volunteers with the Minnesota branch of ESGR.

The battalion the employers got to see in action was the 2nd Battalion, 135th Infantry Regiment, or 2-135 IN. This battalion provides a combat force to the 1st Brigade Combat Team in the 34th Infantry Division, or 1/34th BCT.

The 2-135 IN draws its history in the 1st Minnesota Volunteer Infantry Regiment, which from 1861 to 1864 fought in the Civil War and turned the tide of war to the Union.

In the Battle of Gettysburg, the 1st Minnesota sustained casualties of about 82 percent, but refused to back down. This gave the rest of the troops time to preserve a defensive position.

Command Sgt. Maj. Chris Stroner, who is from Anoka, of the 2-135 IN explained this history and the rest of the battalion’s military achievements to the employers before heading out to the field to watch all four of the companies train over the span of two days.

Over those two days, the employers experienced firsthand what service members go through during two weeks of training and what they could potentially go through if they are deployed.

Those periods of service are time away from work, which is why ESGR does an employer day as a form of outreach to employers.

ESGR was established in 1972 by the Department of Defense to develop and promote a culture or relationship between employers and the military. Most ESGR volunteers are former military members, but some attorneys volunteer as ombudsman.

Christopherson said that ombudsmen are confidential, neutral and have an 80 percent success rate.

Another component to ESGR is explaining the Uniformed Services Employment and Reemployment Rights Act, or USERRA, to service members and employers.

USERRA protects service members against loss of employment, benefits or seniority because they left to perform service. ESGR can negotiate USERRA violations with ombudsmen, but if an outside lawyer is called, ESGR is out, Christopherson said.

The information provided to the employers was well-received, as the employers enthusiastically talked to the soldiers they observed about what they had been learning.

Matt Johnson, vice president of Rochester Asphalt & Concrete, talked with soldiers during chow — meal time — about what employers can do to assist members of the service.

One thing Johnson specifically talked about was Hero2Hired, a service backed by ESGR to help service members find civilian jobs. Service members can use the site like a job search database and upload their resume. The website connects their military experience with civilian job requirements.

Employers can also go on Hero2Hired to post job openings and browse resumes of service members who may be qualified for the position they’re looking to fill.

Rollin Hall, mayor of Wabasha, was vocal in talking with and getting to know the soldiers in the field.

Mark Stephenson, attorney at Stephenson & Sutcliffe, P.A., in Rochester, and Gordon Haubenschild, a business owner in Rochester, even went so far as to try on some of the soldier’s gear — after the soldiers had been wearing it for a few days.

Besides meeting Brig. Gen. Corell, the employers got to meet a few other high-ranking officials within the 34th Infantry Division, such as Lt. Col. Simon Schaefer, commander of 2-135 IN and Command Sgt. Maj. Chris Stroner of 2-135 IN. 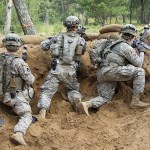 Three soldiers watch from behind a berm during a defensive exercise. – Hannah Dillon/Albert Lea Tribune 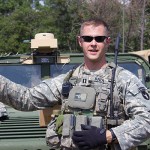 Capt. Laddie Bata of Owatonna, who oversees the 2-135 IN Bravo Company out of Rochester, explains his company’s training to the group from ESGR. – Hannah Dillon/Albert Lea Tribune 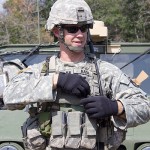 Capt. Laddie Bata prepares to go out in the field by putting on his helmet. – Hannah Dillon/Albert Lea Tribune 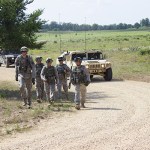 A staff sergeant leads a group of soldiers away from an offensive training exercise, followed by two Humvees. – Hannah Dillon/Albert Lea Tribune 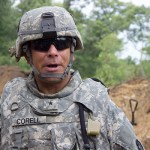 Brig. Gen. Benjamin Corell talks to the employers visiting with ESGR and asks their opinion of his troops, all of which were positive remarks. – Hannah Dillon/Albert Lea Tribune 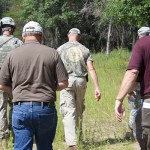