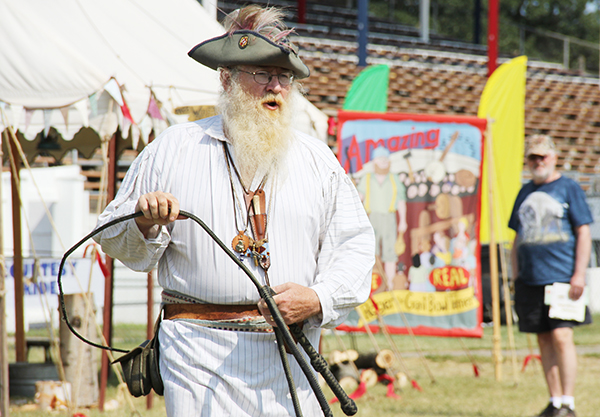 Luke Acord of Winona shows a group of children a paracord whip Thursday morning at the Freeborn County Fair in an area designated as Frontier Village. Acord said the popping sound of a whip was used to drive livestock. – Sarah Stultz/Albert Lea Tribune

Just south of the Grandstand at the Freeborn County Fair this week lies a village rich in history.

Called Frontier Village, the space has almost a dozen tents set up with people demonstrating life in the 1800s, including a candle maker, a spinner, a broom maker and a rope maker. There is also a medicine man, who performs daily shows, and a magician.

In the past, the Freeborn County Fair has had historical demonstrations, but this year that has expanded, said Norm Fredin, fair manager.

“We hope the people can relive some of the past,” Fredin said.

The village is made possible through a Clean Water, Land and Legacy Amendment grant distributed by the Minnesota Department of Agriculture.

Many of the tents offer hands-on experiences for fairgoers free of charge. At one stop people can learn to make rope, at another candlesticks.

He said it was his second year to attend, and he has made brooms for the last 10 years.

“Originally I took a class, and I got obsessed,” Holzwart said.

He uses broomcorn, a type of sorghum, for his craft, which has taken him as far away as the Los Angeles County Fair. Next week, he planned to attend the Erie County Fair.

He and many of the other presenters sleep in tents next to their demonstration sites and have attended the Big Island Rendezvous in Albert Lea in previous years.

Winona man Luke Acord gave an impromptu demonstration Thursday morning to a group of children about how cracking a whip was used to direct livestock. He said it was the sound of the whip — not striking them — that they were used for. He showed two different whips made by his brother, an Albert Lea resident. One was made with paracord and the other with leather.

He had set up a trade tent with two others and was selling handcrafted items that might have been found in that era. He said in that day people would come in and trade for goods.

That sparked a passion within him, so that now he has been attending rendezvous for 30 years.

Also at the trade tent was Christine “Pineapple” Jameson of St. Francis, who demonstrated candle-making.

She said anyone is invited to make candles for themselves at the site during the fair free of charge. They are made by dipping a cotton cord into beeswax that is heated in a pot over a fire. The candles have to be dipped about 50 times.

Jameson said she has dipped candles for five or six years but has attended the Rendezvous for 22 years.

She said she became interested in history as a child when she went to Ft. Snelling. Her children were raised at similar events.

“The biggest thing I get out of it is passing on to the kids why I do this,” Jameson said. “History is more than white-haired guys with names I can’t remember.”

Demonstrations continue through the remainder of the fair. 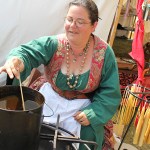 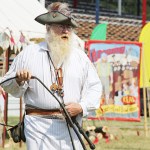 Luke Acord of Winona shows a group of children a paracord whip Thursday morning at the Freeborn County Fair in an area designated as Frontier Village. Acord said the popping sound of a whip was used to drive livestock. – Sarah Stultz/Albert Lea Tribune 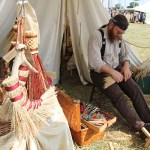 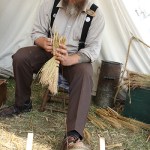 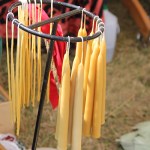