Funeral services for Genevieve (Gen) F. Katzung of Albert Lea will be at 2:30 p.m. Saturday at Thorne Crest Retirement Community in Albert Lea. Deacon Mike Ellis will officiate. Visitation will be one hour prior to the service. Interment will be in St. Theodore Catholic Cemetery. 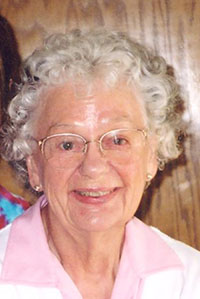 Genevieve “Gen” F. Katzung was born Jan. 9, 1919, the daughter of Walter and Mary (Muchlinski) McKoskey. Gen, 95, died Monday, Aug. 25, 2014, at Thorne Crest Retirement Community after living there for nearly 20 years. Except for brief residences in Minneapolis and a nearby farm, Albert Lea was home.

She was a graduate of Albert Lea High School. Genevieve and Lawrence Katzung were married November 1937 and were members at St. Theodore Catholic Church. Gen was employed at Wilson & Co. and then retired from Universal Cooperative after 20 years.

Gen enjoyed her home on Frank Hall Drive, where she loved nature’s view of Albert Lea Lake, feeding the birds, gardening, needlepoint and cross-stitching many detailed pictures of scenery, flowers and animals.

Following retirement, Gen was able to increase travel with family and friends. Dogs were her favorite pets, including a long-haired dachshund named Bruno.