Getting back on the track 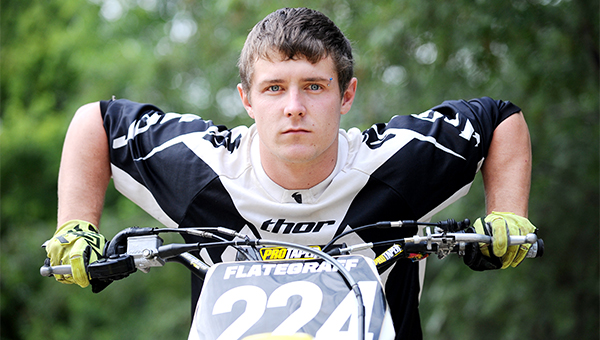 Adam Flategraff sits on his bike Thursday at Loren Sprague’s residence on the south side of Albert Lea. — Micah Bader/Albert Lea Tribune

“There’s nothing like flying 75 feet at 50 miles an hour,” Flategraff said. “Nothing compares to that adrenaline rush.” 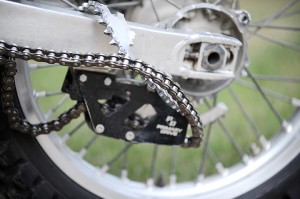 The sprocket of Flategraff’s dirt bike is bent around the swingarm as a result of landing a jump Tuesday at the Motokazie Supercross Series at Austin. — Micah Bader/Albert Lea Tribune

As a Supercross and motocross rider from Albert Lea, Flategraff, 22, said he has competed in about 30 races on a variety of dirt bikes. His first three bikes were Yamaha YZ 85s from the early 2000s. He moved to a 2002 Yamaha YZ 125 and upgraded to the four-stroke 2008 Suzuki 250 that he rode Tuesday at the Motokazie Supercross Series at the Mower County Fair in Austin.

A lap and a half into the race at Austin, Flategraff had mechanical issues after landing a jump. The sprocket for the chain snapped off the rear hub, and the chain and sprocket wrapped around the swingarm.

“I’m just glad I didn’t get hurt,” he said. “It could’ve been a really bad deal if that rear wheel locked up.”

Flategraff has seen and felt the punishment the track can dish out all too well.

It was Memorial Day weekend, 2009, at Spring Creek Motocross in Millville, the site that hosts some of the biggest dirt bike races in the country, including the AMA Pro National.

When Flategraff landed a 70-foot jump called “the fly-away,” he said his bike landed in front of another rider, they collided, and the results were devastating. With a heavy heart, Flategraff said the other rider spent the next three months in the hospital with four broken vertebrae, a broken collarbone, two broken legs, broken ribs down one side of his body and a collapsed lung. Flategraff broke his collarbone, leg and wrist, needed 17 stitches across the bottom of his chin and partially tore the anterior cruciate ligament in his knee.

A year after the accident, Flategraff broke his leg at Hurricane Hills in Mazeppa in his first race back. In all, he said he’s broken nine bones while riding. 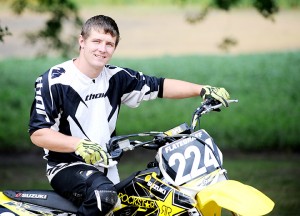 Adam Flategraff sits on his Suzuki 250 dirt bike Thursday at Loren Sprague’s residence on the south side of Albert Lea. He rode the bike Tuesday at the Motokazie Supercross Series at Austin. — Micah Bader/Albert Lea Tribune

However, Flategraff found the courage to compete again this year. The race at Austin was Flategraff’s third of the season. The first two were in June at Plainview.

Flategraff started riding at age 11, and he said his family supported him through it all. Amber Flategraff, his sister, said she attended the race in Austin and attends his races whenever she can.

“It’s fun, but it’s nerve-wracking,” she said. “When he can get around that track and be able to finish without injuring himself or the bike breaking down, that’s always a plus.”

After the bike problems at Austin, Flategraff said he was approached by two riders who offered him to use their rides.

“It’s a very supportive sport,” he said. “I see it as one big family. Whatever you need, someone’s always available to help.”

Qualifying for the Loretta Lynn Amateur National Motorcross Championships is Flategraff’s next goal. He will need to make the cut at area and regional qualifiers.

“There’s only 44 guys in the nation that make it in a class,” Flategraff said. “It’s going to take a lot of work and a lot of training, but it keeps me out of trouble.”

When he isn’t soaring over 70-foot jumps, Flategraff works at Lacina Siding and Windows in Mankato. In addition to installing siding and windows, he also does snow removal.

“If I’m not working, I want to be riding dirt bike,” Flategraff said.

Flategraff has competed in Supercross and motocross racing. The difference between the two has to do with the track. A motocross race is on a hardened track that riders use all year. A Supercross track is put together in a matter of hours at an arena.

Most of the injuries Flategraff sustained were from pushing past his limit. He warned against riders who do that.

“Ride in your comfort zone,” he said. “I see guys 60 years old just putzing around every jump, and they’re having the time of their lives. That’s what it’s all about.”

Adam Flategraff has owned five dirt bikes, and he started riding at age 11.