Hagedorn: ‘These are critical times for the U.S.’

A week after winning an upset victory in the Republican race for the 1st District U.S. House of Representatives seat, Blue Earth man Jim Hagedorn said he is working diligently to share his message. 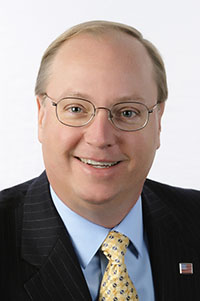 Hagedorn was in Albert Lea on Monday for a Freeborn County Republican Party picnic to rally local Republicans for his cause.

“People believe as I do that these are critical times for the United States, that the big government in Washington is hurting the people,” he said.

He said people are seeing added costs from new regulations, the health insurance exchange and a restrictive energy policy.

“People are more and more realizing we have to have policies that put downward-pressure on prices,” he said.

If he were elected, he said he would work to appeal Obamacare and replace it with a healthcare system similar to what he said many “federal bureaucrats” already receive. He said they are able to get a 75 percent subsidy, and there is no reason that can’t be the same for everyone. He called for tax credits to go to people individually so they can go out and purchase their own health care.

He said Walz has sided with Democratic President Barack Obama on most issues, particularly involving spending. He noted that Obama inherited a Middle East that was stable, and now the whole thing has been turned “upside down.”

Hagedorn said the country needs to get back to a limited government, free enterprise and rule of law.

“My message to everyone is this: ‘We’re focused on Tim Walz,’” he said, noting he thinks he is in a good position to win the seat.