He brings hunted animals back to life 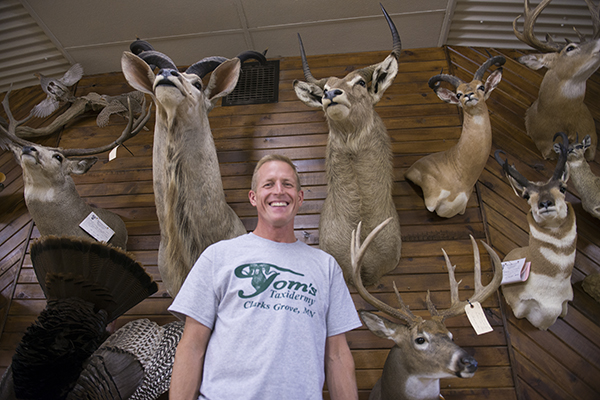 Tom Lenort has owned and operated Tom’s Taxidermy in Clarks Grove since 1990. He first ventured into taxidermy when he was 13, and by the time he graduated from Albert Lea High School in 1983 he had a full-time business on his hands. – Colleen Harrison/Albert Lea Tribune

Taxidermist got his start with fish he caught as a teen

Those are some of the first things you’ll see when walking into Tom’s Taxidermy in Clarks Grove.

Owner Tom Lenort first ventured into taxidermy at 13. He caught a fish he liked, and when his parents wouldn’t pay to have it finished, he took it upon himself. He went to the library, checked out a book on taxidermy and tried it on his own.

“That’s where it all began,” said Lenort.

While the finished project only moderately resembled a fish, that’s pretty much where the experiment ended. He needed to know more.

Lenort, now 49, has come a long way since then. He’s been interested in the outdoors since he was a child, regularly hunting and fishing. He’s been artistic for just as long, trying outlets such as drawing, painting and sculpting. As a teenager, he went through years of mail correspondence courses in taxidermy. Following his junior year in high school he spent his summer vacation at a private taxidermy school taking advanced classes.

What started out as a hobby for Lenort expanded, and by the time he graduated from Albert Lea High School in 1983, he had a full-time business.

“It was pretty tough getting into the work program,” he said. “Most kids were at Hy-Vee or somewhere else. I was self-employed.”

In 1984, Lenort competed in the World Taxidermy Championships and won Best in the World Largemouth Bass in the Master Artist Division. North American Whitetail magazine bought Lenort’s bass and ran his name and photo along with it in the magazine. Soon after he was getting calls from across the country for orders.

“That really got the ball rolling,” he said.

Lenort ran his taxidermy business outside of a barn-turned-studio on his parents’ property, until he purchased his current Clarks Grove location in 1989. After remodeling and setting up shop, Tom’s Taxidermy, 28034 770th Ave. in Clarks Grove, opened in 1990.

Originally, Lenort rented out the other buildings on the property as he wasn’t utilizing the entire space. Now, all three buildings, totaling up to 15,000 square feet, are filled with a showroom, studio and storage for the business.

“I never anticipated needing that much room,” Lenort said.

Lenort said the business is the perfect size for him right now and said he has no imminent plans to expand in the future. He considers himself a perfectionist, and quality and good word of mouth mean a lot to him. While having two full-time and two part-time employees on staff, he enjoys still having a hand in everything that goes out the door.

“I don’t want to get so big that we lose that personal touch,” he said.

Lenort estimates that roughly 30 percent of his customer base is local, or within 100 miles. Local trophies tend to be walleye and white-tailed deer. The rest of the customer base largely brings in African and Asian game.

“You could have a fish one day, a lion or a leopard the next,” said Lenort.

He said the shop has seen everything from elephants, giraffes, cape buffalo and antelope to mice, voles and fish.

Tom’s Taxidermy has shipped finished pieces throughout the country, and internationally to Mexico, Canada and Austria, to name a few. As long as the animal can get to Clarks Grove, there’s no limitation on where a customer can ship from.

With shipments, additional distance and additional borders crossed mean more paperwork, though. Lenort said each country has its own export and import regulations, on top of U.S. Department of Agriculture regulations in the United States, limits on which animals are allowed to be hunted and on which need to be quarantined before shipping, among other concerns.

Once the animal gets to Clarks Grove, the real work begins. Even after passing regulations and being quarantined if need be, everything is treated before being worked on. Lenort said no live tissue comes in from overseas.

“It’s not as gross and morbid as people think,” he said.

Once the animal skins have been salted and treated, they’re sent to a commercial tannery. When they return to the shop, they’re wetted down and stretched out so that the animal’s original dimensions can be determined. Threaded rods, forms and mannequin pieces are used to make a rough shape of the animal, which the skin is then pinned and placed on top of. Incisions along the legs and body are then sewn up. Lastly comes the detail work: tucking in nostrils, making creases for eyelids and shaping the lips, to name a few. The details are the most rewarding, according to Lenort, as he thinks the facial expressions are the most important element to making a piece seem more lifelike.

“We want to make them as realistic as possible,” he said.

Sometimes the business gets involved in creating replicas of the animal’s natural habitat. One piece went so far as having a 60-foot-long, three-story mountain scene built in a customer’s home. Lenort said they’ve also helped design and layout trophy rooms, part of what he calls a “different kind of interior decoration.”

“It keeps it exciting,” he said.

Lenort said it’s hard to tell where the taxidermy business will be in 10 to 15 years. He plans to keep working for as long as possible, to keep busy and to keep putting out quality work.

“I still enjoy coming to work,” he said. “We try to make people happy here.” 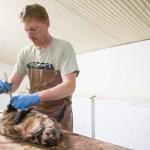 Taxidermist Keith Kemkes begins the process of skinning a badger. Kemkes has been a taxidermist for 34 years and has been at Tom’s Taxidermy in Clarks Grove for 15 years. – Colleen Harrison/Albert Lea Tribune 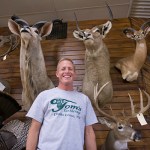 Tom Lenort has owned and operated Tom’s Taxidermy in Clarks Grove since 1990. He first ventured into taxidermy when he was 13, and by the time he graduated from Albert Lea High School in 1983 he had a full-time business on his hands. – Colleen Harrison/Albert Lea Tribune 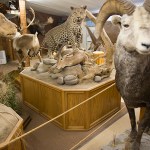 Tom Lenort said that he’s worked on animals of all shapes and sizes during his time as a taxidermist, from mice and voles to elephants and giraffes. – Colleen Harrison/Albert Lea Tribune 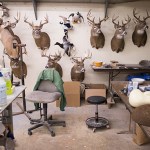 Tom’s Taxidermy’s customer base is about 30 percent local, according to owner Tom Lenort. Most of the local pieces brought in are hunting and fishing trophies of white-tailed deer, bass and turkey, among others. – Colleen Harrison/Albert Lea Tribune 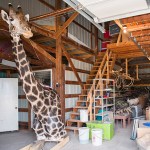 A giraffe piece sits in one of the storage garages at Tom’s Taxidermy in Clarks Grove. Owner Tom Lenort said the giraffe is part of a larger client order. – Colleen Harrison/Albert Lea Tribune 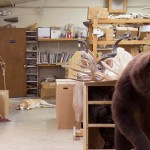