Is this 7-year-old ever going to build stuff?

It all started with a video game called “Minecraft.”

Forrest was spending so much time on the iPad either playing “Minecraft” or watching YouTube videos about the game that I became concerned. I had been worried that my 7-year-old son doesn’t spend enough time creating things and wastes too much time being entertained by cartoons and video games.

After all, I built all kinds of things in my boyhood. Cartoons were limited to Saturday mornings. They didn’t have them after school until I was in high school. After-school programming during my elementary and junior high years offered game shows or reruns of “Happy Days,” “Laverne & Shirley,” “Hogan’s Heroes” and other syndicated sitcoms. 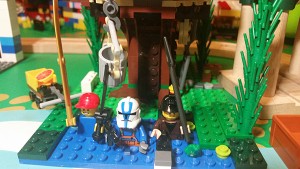 Forrest has these three fellows, a dog and a frog swimming with guns and sharp objects at the base of a Lego treehouse he built.

Though I was pretty much free to roam the country lake we lived on year-round in Iowa 30 miles west of Fort Dodge, we were far from other boys my age nine months of the year, when the people who had lake cabins were away. The nearest ones were about a mile away on a farm. I’d visit, but often the remoteness left me little else to do but launch big projects or watch ridiculous amounts of televised sports. Cable TV wasn’t available in the country.

Pencil or pen in hand, I would draw maps of all kinds — worlds, countries, cities, even detailed aerial views like we see today in Google Maps or Google Earth. There would be cars, dogs, trees, birds, men grilling and, the best part, women sunbathing.

Die-cast bulldozer in hand, I would make roads and cities for my Hot Wheels and Matchbox cars, then drive the cars on those roads. This happened throughout the yard or, in the winter, throughout the carpeted parts of the house. We had the best carpet for making roads. Don’t step on my roads!

Or I would go to my neighbor’s house. They also lived there year-round. They ran Twin Lakes Bible Camp across the street, and they had a boy who probably was too young for me to play with — four years younger — but he had Legos. And this boy, Neal DeVries, no doubt was advanced for his grade level, so we would build spaceships and have big adventures in his basement. We even named our spaceships. One of my favorite ships was titled “Jasper.” That name now is the name of my second son, who turned 2 earlier this month. Not because I liked the spaceship — ahem — but the name always had a nice ring to it.

But I digress. Back to Forrest. Is this kid ever going to build or draw anything?

“Show me what this ‘Minecraft’ thing is, Forrest.”

The next thing I can remember is, I was addicted to it myself. “Minecraft” is building and creating. There are two modes: survival and creative. Both require innovation and encourage building skills. It was “mine” as in digging into the earth and finding minerals, not as in blowing people up. Duh!

The blocky graphics almost makes the game seem like building with Legos but in a video game world. And by using two devices — such as our iPad and a smartphone with the game — Forrest and I could build stuff together, usually in the creative setting, which means you don’t die and you have limitless resources. Of course, being Mr. Map, I made an extensive system of railroads. Forrest liked to make buildings way up in the sky with water fountains or lava pouring out of them or else crazy jails to hold zombie pigmen.

If this makes no sense to you, I’m sorry. Just go with it. My point is, this boy can build, and he makes some rather imaginative things. I leaned toward making things look realistic, while he blew my mind with his wild — but visually stunning — creations.

Forrest and I had seen “The Lego Movie” back in February but on Thursday morning we were both at home. I had a week off, and he was out of school. He checked to see if we had a Netflix movie in the mail, and it was “The Lego Movie.” We watched it, and at the end I asked Forrest, “Would you like it if we made our own Lego city together?”

“Yeah!” he said with a huge smile.

We ran our errands, then began on Thursday afternoon. We spent all day Friday working on it, even making a quick run to Shopko, which had some Lego sets on clearance. We bought one about “The Lego Movie.”

We spent only an hour on Saturday, but then we finished everything on Sunday afternoon. Our city features a train station, a treehouse with a swimming pond, a house, a service station and the place where Lord Business make his evil plans to squirt glue all over everyone with Emmet saving the day.

There is a train system, too, but it is wooden, not plastic. It belongs to the Thomas the Tank Engine world. A train station needs a train, right?

It turns out Forrest is quite the builder, whether on a table or on an e-tablet. I am a proud daddy.

“Today will not be known as Taco Tuesday. It will be known as Freedom Friday, but still on a Tuesday!” — Lucy in “The Lego Movie.”