John Christopher Jordahl passed away July 14, 2014. He had a sudden heart attack. He still enjoyed employment as a successful and respected software developer. 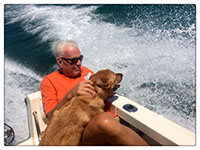 John was born at Letterman’s General Hospital in San Francisco on Sept. 20, 1940. He spent most of his childhood years in Manchester, later moving to Albert Lea.

He graduated from the University of Minnesota and spent time as an officer in the Navy. He is survived by his wife, Cheryl, of St. Petersburg, Fla.; daughter, Nancy Jordahl, of Orlando, Fla.; son, Scott Jordahl, of Buffalo, Wyo., daughter-in-law, Jamie, and three grandchildren, Logan, Lily and Lucas; son, Christopher Jordahl, of Key Largo, Fla.; along with loving siblings and numerous nieces and nephews.