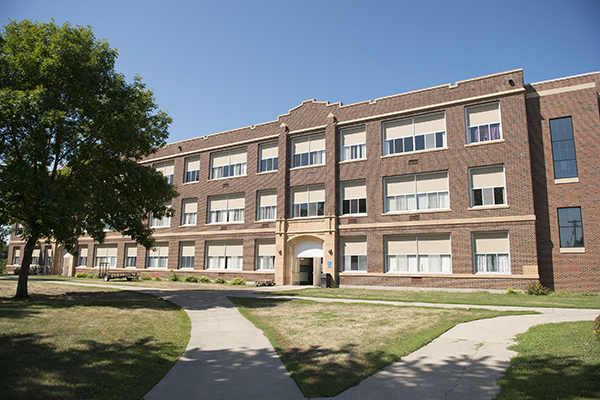 WELLS — Students, graduates, teachers and anyone with memories of high school in Wells are set to say farewell to their building — and hello to a new one.

Numerous events are planned in conjunction not only with Kernel Days but also with a United South Central and Wells-Easton all-school reunion.

Kernel Days began Wednesday with a Wells Library Foundation salad luncheon and wraps up Sunday with a VFW pancake breakfast, a softball tournament and the fourth annual Kernel Days Golf Tournament. In between there will be the Little Miss Kernel program, a fireworks show, the Maple Valley Classic Car Show, a parade and a street dance, among other events. 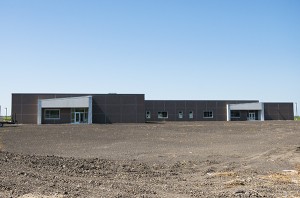 The finishing touches are currently being put on to the new United South Central High School in Wells. – Colleen Harrison/Albert Lea Tribune

On Friday, the all school reunion will get underway. A pre-reunion gathering will take place tonight at Flame Theater, 125 S.  Broadway, where comedians Roger Radley and Don Reese will perform. Led Penny — former Congressman Tim Penny’s band — will perform Friday on Bevcomm stage in Half Moon Park, and “Mr. Jones,” a film directed and written by 1996 alum Karl Mueller, will show at Flame Theater both Friday and Saturday night. Saturday will also offer an alumni golf tournament, tours of the old and new high schools and a through-the-years fashion show, as well as other events.

“We want to have activities for everyone but still have time to visit,” said Lea Nowak, a committee member for both Kernel Days and the reunion.

Nowak said the two committees have been working together to compliment each other. She said fundraising was done separately for both events, with more funding for the reunion coming from alumni while Kernel Days was sponsored largely by community businesses. All in all, she said it’s a great weekend for Wells.

“We’re really looking forward to seeing it come together,” she said. “The whole town will be on display. We get to show what Wells has to offer.”

Nowak did not attend high school in Wells, but her husband, Mark, is a 1964 graduate.

Nowak said she’s put an especially large amount of work into the fashion show and said it will be a mix of high school apparel from over the years. She’s gotten together old FFA jackets, formal wear from as far back as the ’50s, band uniforms and letterman jackets that total up to about 100 different garments that will appear in the show.

The response to the reunion has been strong, according to Nowak. T-shirts were designed for the reunion, and over 500 have been ordered already. Events that require registration or ticket purchases have been steadily growing as well, she said.

“It’s going to be good,” said Nowak. “It’s a chance for people to come home.”