At age 49, Albert Lea resident DuWayne Kirchner was at the top of his game in the insurance field. Then he got a life changing diagnosis: Alpha-1 lung disease. 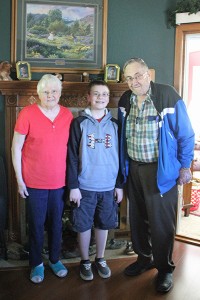 Alpha-1 is a disease passed from parent to child through genetics. Usually, two genes for every trait inherited are passed to a child, one from the mother and one from the father. When a person receives a defective antitrypsin gene from both parents, they have Alpha-1. Antitrypsin is a protein that comes from the liver which protects the lungs from inflammation and infection. Alpha-1 can cause serious lung or liver disease at different ages.

Approximately one out of every 2,500 Americans are diagnosed with Alpha-1. Kirchner comes from a family with one brother and three sisters. Two of his three sisters are carriers of the disease, and the other was not affected by it. Kirchner’s brother, Marvin, was also diagnosed with Alpha-1, and passed away from complications of the disease earlier this year. Neither of Kirchner’s two sons were affected by Alpha-1.

At age 55, Kirchner had to leave the insurance field and his 1,500 clients. He received news from his doctor that if he didn’t quit working and take care of himself, he could die. Kirchner realized it wasn’t a choice, it was something he had to do.

Because of his experience with insurance, Kirchner knew to take out an extra plan. Treatments are expensive, so having coverage is important. He has been on oxygen since 1999, gets intravenous therapy on a regular basis, has two different inhalers and takes 23 various pills. He takes good care of himself, but still gets infections about twice a year. He knows his body well enough that he can tell when he has one. Kirchner also has congestive heart failure, which complicates the disease even more.

Kirchner has been a member of a regional support group for people affected by Alpha-1. His brother was also a part of an active support group in Wisconsin. Although being a part of a group of individuals who are going through the same thing, Kirchner found his faith and the support of his family is the most important thing. A plaque is displayed in Kirchner’s home, which reads “The love of a family is life’s greatest blessing.”

“If you don’t have the love of your family when you’re sick, you won’t be around very long,” Kirchner said. “I have the best.”

Kirchner said he tried to live every day for the Lord and to the fullest. Whether he is trying to help people with insurance, even though he can’t sell it anymore, or spending time with his grandchildren, he does just that. Kirchner’s grandchildren Landon and Kaedyn enjoy helping their grandfather out and keeping him company. 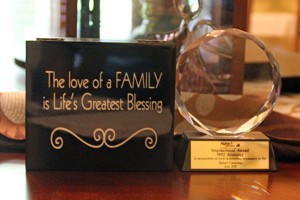 A plaque which reads “The love of a family is life’s greatest blessing,” along with an inspirational award DuWayne Kirchner won as a 1992 attendee to an Alpha-1 group are displayed in his home. – Erin Murtaugh/Albert Lea Tribune

Kirchner has been working on filing paperwork with his wife, Margie, and living a lifestyle to take care of himself and avoid infections. He also enjoys cooking, and his specialty is making soups. When Kirchner goes out to eat, to a doctor’s appointment or almost anywhere he goes, he can be referred to as “the candy man.” Whether it’s his waitress, nurse or anyone he encounters, he’ll leave them with a Werther’s candy.

Kirchner can also be found handing out small crosses to people, too, as a symbol of his faith.

“I would like grace, hope and blessings from the Lord up above,” Kirchner said. “When the Lord takes my hand and leads me, that’s when I’ll go. Attitude is half of it.”